Eleventh grader Denys Shushmyntsev: "Achieve your goal and don’t be afraid of any obstacles."

During self-isolation, rapid changes in everyday life, the learning process in schools around the world, and in Ukraine in particular, has significantly changed. Students of the Faculty of Journalism of ZNU spoke with students of graduating classes from different cities of our country. The topic of their communication was the things that the student community are concerned about the most today. This is what the eleventh grader of Zaporizhia comprehensive school I-III grades №3 Denys Shushmyntsev told.

The project “English Speaking club: cinema on Wednesdays” with the participation of school students continues its work on the Faculty of Social Sciences and Administration

Since the beginning of the education year, an English-speaking Speaking club called the “Wednesday Movie” has been active on the Faculty of Social Sciences and Administration. It should be mentioned that it was organized on the initiative of the Department of Social Philosophy and Management (headed by Professor Taras Butchenko). 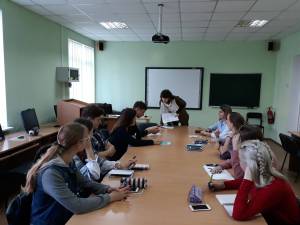 On the Faculty of Foreign languages of Zaporizhzhia national university, free listening trainings were resumed  in October for students of 11 grades of schools in Zaporizhzhia and the region. 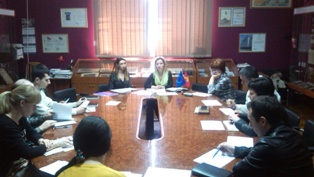 On 6th of April in Zaporizhzhya National University held a meeting with the deputy deans of career guidance of all departments. During the meeting summed up the traditional sample testing, organized by our HEI (Higher Educational Institution). Also, the participants learned about the dates of the substantive sessions of the EIT which will be held on the basis of our university.
Відділ доуніверситетської підготовки профорієнтації та працевлаштування профорієнтаційна робота зовнішнє незалежне оцінювання тренінги проект
348 view 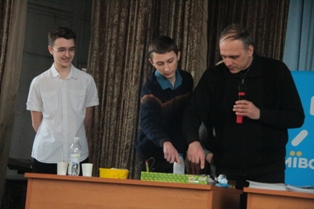 February 29. Zaporizhzhya National University held a public lecture on the occasion of the 100th anniversary of the discovery of Albert Einstein's general relativity. The event, which is attended high school schools, gymnasiums and lyceums of the city and the region, organized by members of the Department of Education and Science of Zaporizhzhya Regional State Administration and Research Laboratory, a branch of the National Center "Minor Academy of Sciences of Ukraine" with the support of representatives of our university. Became lecturer Associate Professor of Theoretical Physics Dnipropetrovsk National University. Honchar, a permanent member of the jury of Ukrainian students in physics known scientist Oleg Orlyanskiy.
Фізичний факультет МАН лекція профорієнтаційна робота Physics
410 view 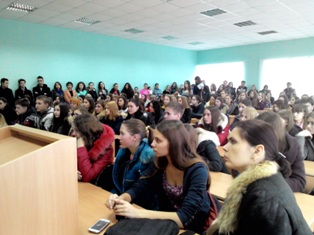 Three years ago, representatives of the faculty of Zaporizhzhya National University with the information-analytical methodical center of the Department of Education and Science, Youth and Sports of Zaporizhzhya city council launched a competition «FRESHview: add a foreign language to read the book." So on February 27 FIF has traditionally held Round contest. The event was attended by 159 students 10 and 11 classes, writing essays in English, German, French and Spanish.
Факультет іноземної філології конкурс профорієнтаційна робота Foreign Philology
369 view

Competition for young IT specialists 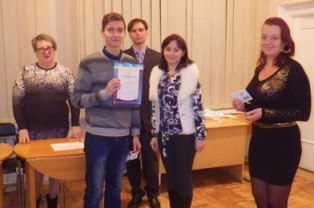 Based on the Junior Business Management Academy of Kommunar regional center of youth and students held city tournament in information technology. Tournament organizers were: the Department of Education and Science, Youth and Sports of Zaporizhzhya City Council, Department of Economics of Zaporizhzhya National University, and ZOIPPO Komunarskiy regional center of youth and students.
Економічний факультет профорієнтаційна робота змагання Economy
236 view 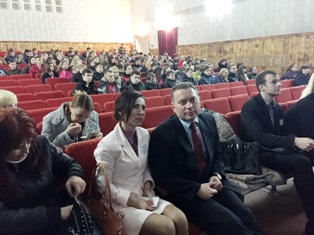 A meeting with representatives of Zaporizhzhya National University visited 159 pupils of 9th-11th forms of all the city schools of Gulyaypole. They were able to view a list of university specializations, its rules of admission for 2015 and features of this year entrance campaign.
Відділ доуніверситетської підготовки профорієнтації та працевлаштування профорієнтаційна робота
203 view 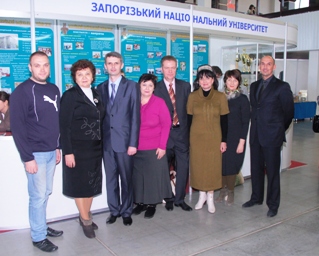 November 6 at the premises of the exhibition center "Kozak Palace" was solemnly opened the three-day exhibition "Educational Fair". This time within it combined its work XVI Exhibition of educational institutions "Entrant - 2015" and "Education Abroad 2015", which is already the fifth time. Among its members was traditionally represented Zaporizhzhya National University.
Університет виставка профорієнтаційна робота
210 view
Pages : 1 2 3 4