Representatives of ZNU took part in the Autumn students’ party, dedicated to the International Students’ Day, where the winners of the competition “A Student of the Year” were awarded. In the nomination “The Artist” Julija Vlasenko, the third-year student of the Economy Faculty, set the first place.
188 view 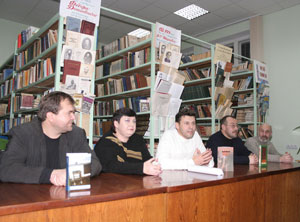 Three famous Ukrainian writers Pavlo Vol’vach, Boris Gumen’uk and Stepan Protsjuk visited ZNU and presented the project “The Other Literature”. This meeting was organized by the Philological Faculty.
295 view 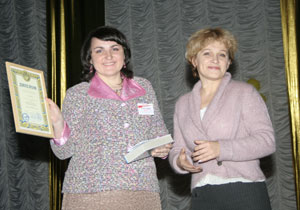 In course of the Second Zaporizhzhya Regional Exhibition of youth newspapers “Youth Accent” the competition of the best newspapers was held. The academic newspaper “Zaporizhzhya University” took the second place in the nomination “Students’ Newspaper”. Its supplement – the newspaper “The Ninth Storey” – was rewarded the deed “For the Initiative”. The youth magazine “Dziga” won in the nominations “Example of the Students’ Magazine” and “For the Best Decoration of the Exposition”
203 view

Presentation of the book «Muse of Roksolaniya»