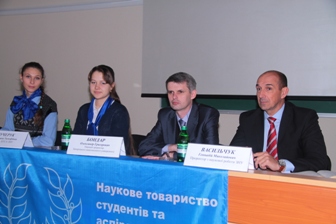 October 29 was a significant date for all members of the Scientific Community of Zaporizhzhya National University. While the conference was organized by delegates from all the Faculties of our university elected new Head of students' government and voted for the merger of SCSP with the Council of Young Scientists. The result - in ZNU formed a new structural division, which should be united not only those, who have just started his academic career, but also their more experienced colleagues - Scientific Community of Students, Postgraduates, Doctoral Students and Young Scientists.
Наукове товариство студентів аспірантів докторантів і молодих вчених звітно-виборча конференція
241 view 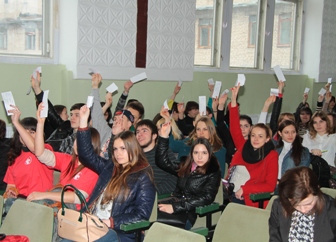 April 2 in Zaporizhzhya National University during the students' report-election conference was held the second round of elections of Head of the Students' Council of our university. In the first round, which was held on 25 March at the post fight continued 3rd year student of the Faculty of Physical Education Vladyslav Vorotkov and 4th year student of the Faculty of Journalism Olha Lebedieva.
Студентська рада звітно-виборча конференція
313 view 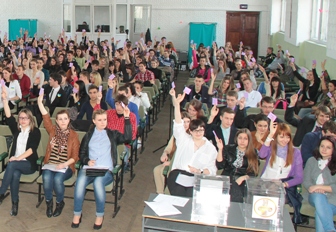 March 25 at Zaporizhzhya National University was conducted students' report-election conference. During the event, the participants - delegates from all Faculties and colleges of our university - listened to the report of the Head of the Students' Council of ZNU Anton Osadchuk and participated in the first round of the elections of the Students' Council Head. Their candidatures for the post applied 3rd year student of the Faculty of Physical Education Vladyslav Vorotkov, 3rd year student of the Law Faculty Oleksii Krasov and 4th year student of the Faculty of Journalism Olha Lebedeva. In addition, during an event was held voting amendments to the Regulations of student government in our university.
Студентська рада вибори звітно-виборча конференція
371 view
Pages : 1