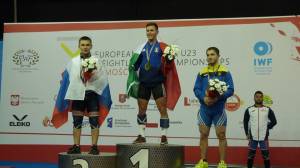 The European Weightlifting Championship among juniors and youth took place in Poland. Four representatives of the Zaporizhzhia region, as part of the Ukrainian team, took part in the competition. The first day of the competition became quite successful for sportsmen from Zaporizhzhia as the bronze medalist of the European Championship in the 56 kg weight category became a student of Zaporizhzhia national university Dmytro Voronovskyi, who in total showed the result of 235 kg-104 kg jerk and 131 kg of push.