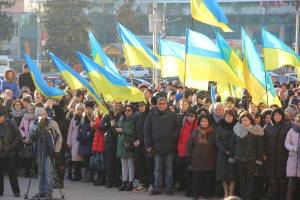 On November 29 in Zaporizhzhia on the Square of Heroes, near Zaporizhzhia regional state administration held a large-scale patriotic event.  As a sign of support for the defenders of our maritime borders and the sailors who are in captivity of the Russian Federation, a solemn rising of the flag of the Naval Forces of Ukraine took place. The event was attended by high-ranking officials of the region, the military, and representatives of public organizations, higher educational institutions and all concerned patriots of the city. The representatives of Zaporizhzhia National University did not remain aloof from this important event. The event was joined by professors and students of the Faculty of Law and the Faculty of Foreign Philology, employees of the educational work department and other representatives of the university.