Students of the Faculty of Law, Zaporizhzhya National University have taken part in the following meeting of Coordinating Council of junior lawyers under the Central Administration of Justice in Zaporizhzhya region
Faculty of Law session law education activities new Law
233 view

Adopting approaches from our international counterparts

Chief editor of ‘Comments’ Weekly Vadym Denysenko: “It was long since I had been to the lecture hall with so many good questions being asked”

Students of Journalism have met with the chief editor of ‘Comments’ Weekly Vadym Denysenko. Suggested by the guest ‘question-answer’ meeting framework allowed future journalists to get more information on ins and outs of the popular edition and see the standpoint of Vadym Denysenko on the future for the national printed media. The authors of the best questions were presented with the 'Comments' subscription.
факультет журналістики Візит визначних людей Journalism
198 view 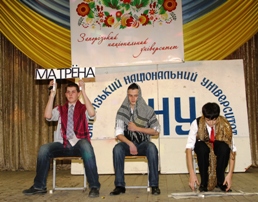 At last the much-anticipated semifinal of the Open Championship for Rector’s Cup (ZNU) started. The event was supported by the Centre of after-class activities.
КВК
240 view

Outcomes of Research and Creative Projects Contest on ‘Europe in Ukraine, Ukraine in Europe: Youth Perception 2011-2012’

Congratulations from the Department of Postgraduate and Doctoral studies

Congratulations from the Department of Postgraduate and Doctoral studies
135 view 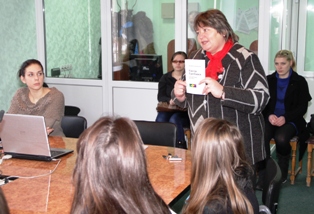 How can one get to the College of Economics and Law (ZNU) by love tram? 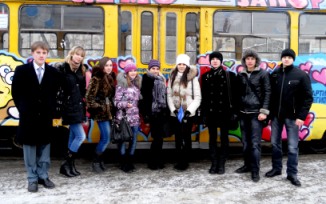