Congratulations to Professor Fedir Turchenko on his anniversary 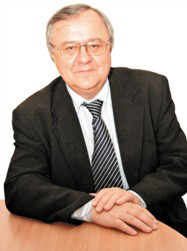 Teaching staff and students of the Department of Ukrainian History, Faculty of History and the whole academic body of Zaporizhzhya National University congratulate Professor, Doctor of Historical Sciences Fedir Turchenko on his 65th anniversary

Professor Fedir Turchenko is widely acclaimed as an expert in his field, intellectual, scholar of authority, highly qualified professional, whose research activity is appreciated in both national and international research circles.
Since the time when Fedir Turchenko had been conferred a Ph.D. degree in Kharkov State University, 1977 and was appointed to position of lecturer at the Department of Ukrainian SSR and USSR in Zaporizhzhya State Teachers' Training Institute, the life path of the scholar was inseparably linked with this educational institution. His contribution to the development of the Faculty of History and Zaporizhzhya National University in a whole can scarcely be exaggerated.
The scholar's intensive teaching and administrative duties could not prevent him from rich research activity. Having presided over Department of Contemporary Ukrainian History and then more than ten years over the Faculty of History Fedir Turchenko has been at the same time developing one of the first textbooks for secondary schools in Contemporary Ukrainian History.
In April, 1992 Special Academic Board has been s under the Faculty of History, presided by Fedir Turchenko. During the period of its functioning over 150 researchers across large number of Ukrainian cities (Zaporizhzhya, Kharkiv, Kyiv, Cherkassy, Ostrog, Dnipropetrovsk, Poltava, Kremenchug, Berdiansk, Donetsk) have obtained Ph.D. degree. Among them Tetiana Gerashchenko, associate professor at Zaporizhzhya Law Institute of Dnipropetrovsk National University (Ministry of Internal Affairs), Olexander Starukh, department head in the President’s secretariat, Igor Salamakha, dean for Zaporizhzhya Institute of Economics and IT, Mykola Frolov, ex-vice head of Zaporizhzhya Regional State Administration and many others.
Even now, while supervising postgraduate students Fedir Turchenko continues with his productive research endeavours. The fact evidently shows that since 1992 research works of the scholar are introduced with over 200 new scientific papers, a series of monographs and over 10 textbooks.
So on this special occasion we wish the honourable Fedir Turchenko to stay in good health, happiness and wellbeing, big success and achievement in any affair undertaken, inspiration, enthusiasm and many years among his family, loyal friends and trustworthy colleagues.