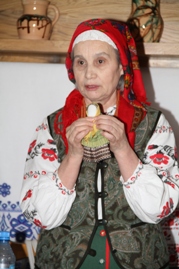 Mrs. Berdnyk-Sokorynska came to Zaporizhzhya after invitation by the community from ‘Oleksandrivskyi’ Charity Fund. The meeting with ZNU officials and workshop were possible due to support from Scientific Library, ZNU and Faculty of Philology, in particular Department of Ukrainian Studies.
Motanka dolls by Valentyna Berdnyk-Sokorynska are widely popular outside Ukraine, some samples are even exhibited in New York Institute Museum (U.S.A.). Within the last 9 years since Mrs. Berdnyk-Sokorynska has started her engagement with doll-making, she has made thousands of dolls. Her workshop was visited by Oksana Yatsenko, head of Ukrainian Women Union, Zaporizhzhya affiliate and also members of the Union, school students of 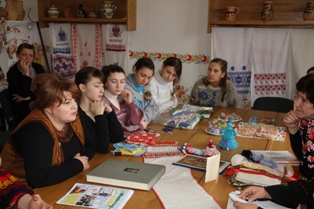 of 'Tsarevna' School of Noble Ladies functioning under the Union’s auspices, representatives from the Faculties of History and Philology and everyone captured with the art of doll-making.
The meeting opened with the story on the much-forgotten stratum of sacral culture of our nation which is motanka doll. These dolls have long served as talismans in Ukraine and could safeguard a family against enemy force and attract wealth and good health. Mothers-to-be 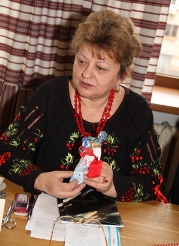 would make the dolls and put them into cradles to begin ‘shaping’ their baby’s soul. It was a good sign, when children made motankas with their own hands.
Valentyna Berdnyk-Sokorynska has also shared her path to doll-crafting at the age of 55, recollecting motankas made by her grandmother and the way it helped her overcome grief after her husband's passing away. Eagerly she asked Zaporizhzhya masters on their artistry. In particular, it appeared that the guest is already familiar with crafts of Galyna Pavliv - wooden painted dolls revealing historical characters and heroes from literary and folk works.
Mrs. Berdnyk-Sokorynska said she has chosen the simplest model of motanka, which can both serve as talisman and remind of the meeting in ZNU. Even those visitors who have already gained skills in making the dolls shared to have found a lot of new and remarkable moments.