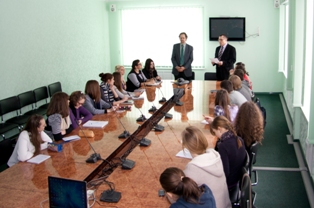 Mister Bush appeared to be well-informed on the issues of modern American mass-media, global politics and economy. In their turn students demonstrated their proficiency in English that allowed for quite open discussion on diverse topics interesting for the both parts: political and economic systems and related processes in Ukraine and the U.S.A., educational and cultural issues in these nations.
Professor Bush looked into the issue of post-Soviet countries development coverage in mass-media,

in particular such newspapers as The New York Times and The Washington Post. Newspapers pay much attention to political processes taking place in our country, Ukraine’s integration to EU and living standards in Ukraine etc. The guest shared his perception of diverse processes occurring in Ukraine and showed genuine interest in Ukrainian students’ standpoint. Professor also pointed out that the same issues were crucial for Americans, in particular politicians and businessmen interested in fostering bilateral relations. ніх відносин.
The students were curious on how cultural, educational and social issues are being covered by American mass-media. They tried to make an in-depth survey of modern history processes - perestroika period, Soviet Union collapse and emergence of newly-born Ukrainian State stressing that Americans are still identifying Ukraine to Russia which can be traced in programmes broadcasted on American TV.