The 82-nd Academic Year at ZNU Has Begun 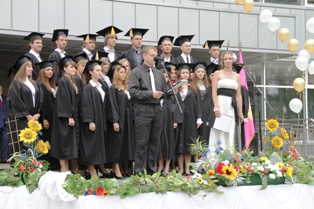 This year, the Day of Knowledge was celebrated at the last day of summer - 31-th of August. The higher authorities and honorary guests of the celebration congratulated lecturers and students on the beginning of the new, 82-nd academic year at the best Zaporizhian university. The celebration's organizers - the employees of the Cult-Mass work in ZNU - prepared lots of surprises for present guests. 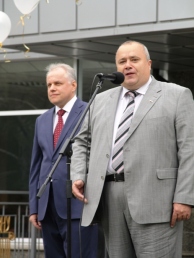 During the solemn part of the celebration the head of the regional council, the graduate of the Faculty of History Pavlo Matvienko said he was proud of getting a higher education withing the walls of our university. He congratulated the first-year students for the right choice and assured them that ZNU must enter the top 20 of the best country's higher educational establishments with such star cast of lecturers and students. 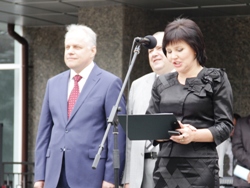 The Vice mayor of Zaporizhia Zinaida Boyko, which also graduated our Faculty of History said today first-year students would rebuild Ukraine in a few years, the future of the country would depend on them.
The rector of ZNU, professor Mykola Frolov hoped that year would become the remarkable event for each student and the major milestone 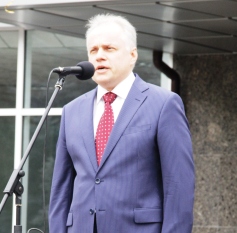 in lives of all lecturers. Separately Mykola Oleksandrovich welcomed 2405 first year students. He assured the authority of ZNU would do everything for making those five years memorable for the new students.
The celebration was begun with the concert. The members of the vocal-studio of ZNU "Cantilena" performed on stage. After welcoming the audience, the hosts of the celebration – the head of the Student Council Andriy Bondarenko and the head of the Student Council of the Faculty of Biology Alina Grushko – said Zaporizhzhya 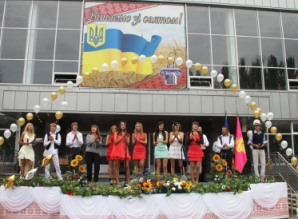 National University had a beautiful past and present, but first of all, it would have a wonderful future.
After congratulating, the traditional first year student oath was voiced by the head of the Student Council Andriy Bondarenko , then the student's hymn «Gaudegamus» was performed by the undergraduates.
In order to congratulate our lecturers and students on the Day of Knowledge, the Children Youth Symphony Orchestra (director - Sergiy Skripnik ), the "alive statues" - the members of Zaporizhian "Mime-studio", the choreographic studio "Phoenix" were come. Also 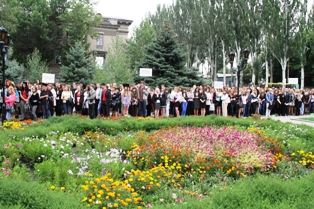 "The Golden Voice of ZNU", the Faculty of Physical Education student, the member of the the vocal studio "Cantilena" Ivan Krasnikov and the members of ZNU choreographic studio «D.A.L.S.» were performed for audience.
During the event, separately, were welcomed the representatives from the College of Economics and Law, which is five years now.
After the celebration the first year students were closely acquainted with the deans, lecturers, student councils of the faculties and the campus tour.