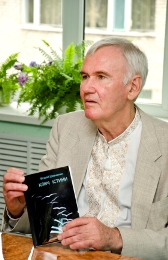 Celebration to mark 75th anniversary of the Head of ZNU Department of Social Communication, Advertising and Public Relations, Dr. of Philological Sci., Prof. Vitaliy Shevchenko gatered not only lecturers of the Philological Faculty and Faculty of Journalism, where he has been working for a long time. The representatives of University Administration, The Faculties of Foreign Philololgy, History and Physics, community organizations, and people are well-known far beyond the borders of our city — friends of Vitaliy Fedorovich.

Congratulating Vitaliy Shevchenko on behalf of administration on the significant date Vice-Rector for Educational Work Vladymir Volkov said that the scientific and practical activity of Vitaliy Fedorovich was a bright milestone in the development of journalism and literature.

The event was opened by the Head of Department of Ukrainian Studies, former graduate student of the jubilee, Docent Olga Stadnichenko. She presented Vitaliy Shevchenko's book «A Call of Truth: Selected Research Papers». The anniversary book contains 21 literary articles, 7 journalistic theory works, a madrigal in honor of the jubelee by patriarch of Zaporizhzhyan poetry Petro Rebro and foreword by another former graduate student of Vitaliy Fedorovich, Docent of the Department of Ukrainian Literature Oksana Protsenko.

Jubelee promised that on the centenary of his birth his new book would be twice thick as the previous one and there would be lots of journalistic articles. In her congratulatory message to Shevchenko, Dean of the Faculty of Philology, Docent Tamara Homyak noted there were a lot of former students of Vitaliy Shevchenko among lecturers of the facuty, all of those present congratulated the hero of the day, talented scientist of literary-journalistic interests, wise mentor and teacher.

Doctor of Historical Sciences, Professor Fedor Turchenko remembered another facet of the jubelee's acivity: there were several Shevchenko's articles in the fundamental scientific work «Encyclopedia of Cossacks». There were times when Jubelee held lectures on the reflection of history in literature at the Faculty of History. Vitaliy Shavchenko is also one of the scientific direction and scientific conference «Literature and History», which going to gather literary critics and historians in our university this month.

The Dean of the Faculty of Foreign Philology Galina Moroshkina, Professor of the same faculty Yuriy Zatsniy and representative of the Faculty of Physical Education — laureate of the State Prize of Ukraine, Professor Valeriy Mishenko and Docent Valentyn Snejniy sincerely congratulated the jubelee and wished him all the best.

The former head of the Zaporizhzhia Region National Writer's Union of Ukraine, kosh of the International Association of Comedians and Satirists «Merry Sich» Petro Rebro presented to Shevchenko some of his books including — the eighth volume of »Selected: Literary Zaporozhye. XX Century Literature of Zaporozhye», and noted that Vitaliy Fedorovich knew the great number of writers from that volume personally, often became their critic and reviewer.

The younger generation of Zaprizhzhyan writers, such as poetess, member of NAUU Lubov Genba congratulated Shevchenko. The famous composer and singer, merited artist of Ukraine, winner of many song contests Anatoliy Serdyuk congratulated the jubelee with the symbolic song «Father Ataman». Since Shevchenko, aside of his educational and scientific activities, worked with the regional newspapers «Zapopozhye Truth», «Industrial Zaporozhye » in his early years, he was very pleased by the congratulations from the deputy chairman of the regional organization of the National Union of Journalists, editor of «Industrial Zaporozhye» Vladymir Dupak.