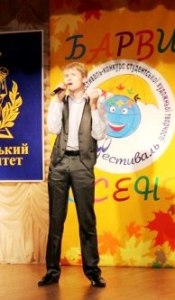 Participants were accepted with Kyiv European University. During its existence festival gained its popularity among creative gifted youth. Thus, there in the XV festival “Paints of fall – 2012” took part 270 students from 44 Staten and Private Universities of Ukraine.
This year our University was represented by the student of Philological Faculty, the participant of vocal studio “Kantilena” of cultural and mass work Center of ZNU Olexiy Vorozheev. He performed in “Pop song” genre and took the jury’s attention at once. Also Olexiy was offered to take part in gala-concert and festival hymn recording. Olexiy Vorozheev became a laureate of the 2nd stage in the “Pop song” nomination.
The representative of Zaporizhzhya National University was specially noted by the head of the jury of XV International Festival “Paints of fall – 2012” Victoria Kasyanova and the guide of the program “Breakfast” on the “1+1” TV channel, by retired soloist of the “Toys” band Olexiy Nagrudniy, who wished Olexiy do not stop on his achievements and to come the next year, because its pleasant to watch after such singers as he.
We thank an administration of the University, Student Council, cultural and mass work Center and the head accountant of ZNU Vasiliy Timoshka for giving an opportunity to take part in this activity.