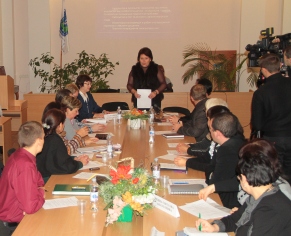 December 4, the roundtable on "Promoting Prevention of Domestic Violence and Violence Against Children Practice" in the framework of the Gender Forum 2012. It was attended by the government officials, police officers, teachers, scientists, students and community activists.

The roundtable was opened by the Dean of the SSP Faculty, Docent Olga Ponomarenko and Active Head of the Department of Family, Youth, and Sport Affairs Lyubov Yarova. They wished forum's paricipants productive work and implementation of developments in future activities and volunteer services to prevent violence in families and society.
The main issues of the roundtable were violence in society, in particular - against the woman, child as legal, psychological and socio-pedagogical problem. It was also about the activities of the internal affairs in accordance with the Law of Ukraine "On Prevention of Domestic Violence", the possibilities of inter-sectoral cooperation in the prevention of violence against children and the effectiveness of current practices of domestic violence prevention were discussed. Coordinator of the Center for Civic Initiatives (CCI) youth programs Igor Vasylev, psychologist, coordinator of the Zaporizhzhya women's organization CCI training programs Olga Chernyak, teacher of the school "Osnova" Svitlana Rozenkova and other representatives of the social organizations and ZNU told about the educational programs of domestic violence prevention and their implementation into life.