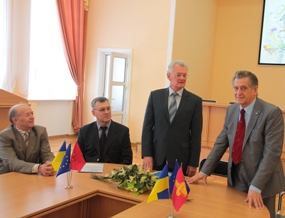 On 22nd of March took place the meeting of the round table, which devoted to celebration of the International day of water. At the meeting of the round table there was the
The Vice-Rector for Science and Research of ZNU– Victor Gristchak, the head of the general and applied ecology and zoology department, professor Olexander Rylsky, the deputy dean on Science, the associate professor of immunology and biochemistry – Vira Kopiyka, activists of students and graduate students Scientific organization of biological faculty, students and lecturers of chemistry, ecology and zoology departments.

This event also was visited by guests: the professor of Institute of colloidal chemistry and water chemistry of A.V. Dumansky of Ukr 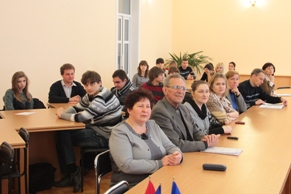 aine, the expert in the field of microbiology and biotechnology of water purification Petro Gvozdyak, and also the physician - the psychologist – Vladimir Novichenko.
Olexander Rylsky noted that the similar action devoted 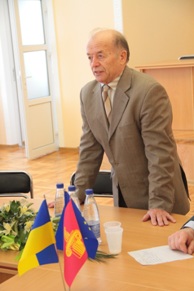 to the International day of water held for the first time in ZNU, but in the future, it can become traditional.
Professor Petro Gvozdyak appeared with the report on the subject “Features of Drinking Water in Ukraine”. Volodymyr Novichenko – the director of Zaporizhzhya public health-improving center “Zdorov’ya”, made the following report. He told about a method of activation of water, which developed by their center. The Reports of guests caused a particular interest among audience, and respectively caused a lot of questions
Students of the II-III courses of biological faculty also made the reports: Oksana Kamenova “Deficiency of water resources”, Lydia Krupenko “Water hyacinth - the terrible aggressor or the savior of a planet”, Anastasia Kobylyatska “Life in a water drop”, Kateryna Plotnikova “Global warming thawed icebergs”, Anastasia Skokova “The structured water. Concept of water memory”, and Olexander Voloshin “Deuterium and deuterium oxide”.
The participants of meeting of the round table exchanged the thoughts, drew conclusions and considered possible methods of improvement of water quality in Ukraine at the end of event.