The basketball tournament dedicated to the Victory Day started at ZNU

Today the basketball tournament among the student sports teams has been started at ZNU Sports Complex. It’s dedicated to Victory Day. It was organized by Sports Club ZNU and the Department of Physical Education involving the Center on cultural work. 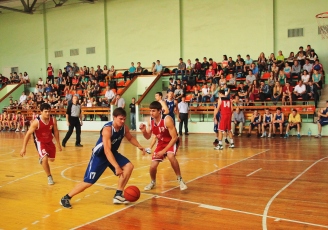 Sumy State University. At the gym of the SC of ZNU the representatives of the Administration of ZNU, teachers and students also g 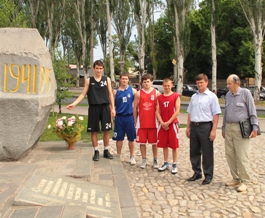 athered to support the players and to honor the memory of the Motherland defenders, who won the Great Patriotic War.
The first vice-rector ZNU Oleksandr Bondar opened the holiday and welcomed the participants. He said: “I am delighted to welcome young athletes in the walls of our university. The administration of ZNU maintains the good initiatives of the Student Council and activists of the student movement. Young people should remember and honor the heroic deeds of our ancestors!”
The head of the Department of Physical Education Victor Horbulya the chief referee Petro Draga also joined greetings. They thanked the organizers of the event for their support in 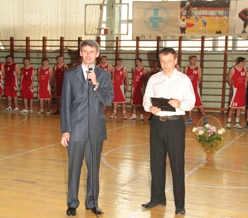 conducting annual student competition, dedicated to the Day of Victory and which is held for the five consecutive years in the walls of our university. They looked forward to continuing and developing this good tradition.
The veteran of World War II, professor of the Department of Russian Philology Valentyn Ivanenko welcomed the participants and all who were present.
“We continue to celebrate the “saint Victory!”- Valentyn Kuzmovych said. He wished the players success and new victories, and presented the audience his poems dedicated to the veterans-winners and sports. The member of the vocal studio “Cantylena” Yevgeniya Kondrashova greeted the audience by her vocal performance.
The memory of those killed in the Great Patriotic was honored by the minute of silence. And the team captains along with the honorary veteran Valentyn Ivanenko put the flowers at the memory stelae of the teachers and students of the university killed during World War II.
During the first day of competition there had been two team meetings: between the combined teams of Sumy State University and ZNTU-CYSS № 12 and between the team of ZNU and the team of Zaporizhzhya Metallurgical College ZSEA.
The competition will last for two days.