Charity evening "Save a Life" from The Student Government of ZNU 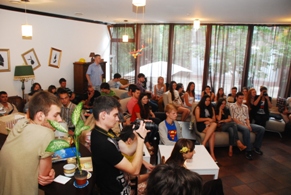 On 16 of June, charitable evening “We will save life” took place in support of Rosa Mamedova - the student of first course of foreign philology faculty of ZNU which is seriously ill. This event was organized by The Student Government of ZNU and supported by The Cultural-Mass work Center of ZNU.

For the first time this charitable event in support of the girl took place at more large level. Let's remind that the doctors made the scary diagnosis to Rosa - a malignant cerebral glioma, and the family of the girl, unfortunately, doesn’t have sufficient funds for treatment. The Student's Self-Government of our higher education institution tries to help a family of the sick girl. 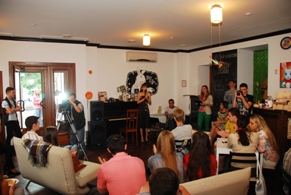 The concert program of charitable event took place about three hours. The whole group of talented musicians of our city was appeared on the stage – Andriy Loboda, Diana Mess, the groups” Syncopation” and “NaSluhu “, the rap-group “A.D.A .”, the violinists Olga Knysh and Ilona Levchenko, the vocalists Nick Usatov, Mikolay Bilyk, Maryna Klimenko, Alica Krivosheyeva, Anna Slizinova, Dmytro Serkov, Lolita Molchanova. All Musicians gathered to help to save Rosa’s life. Two charitable auctions took place on this event. One of them (absolutely improvised) was carried out by Diana Mess and the second – the partners of charitable event “Old Rabbit”.
More than three thousand hryvnias managed to collect during the charitable event. The Student Government of ZNU expresses sincere words of gratitude for support to all musicians, student’s government of foreign philology faculty, to the partners –“Old Rabbit” and The Cultural-Mass work Center of ZNU and to all guests of this fine evening!