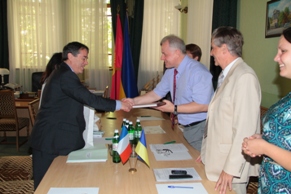 On 19th of June the Extraordinary and Plenipotentiary Ambassador of France in Ukraine – Alain Remy accompanied by employees of Embassy arrived to ZNU with working visit. The questions of further partnership between honorable guest and the management of our higher education institution were considered during this meeting. 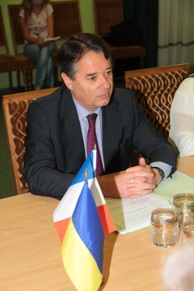 The Rector of ZNU, Professor Mykola Frolov greeted guests and told them about the scientific capacity of university, and also acquainted with geography of international activity, in particular, partnership of ZNU with French universities.
The First Vice-Rector of ZNU – Olexander Bondar, the Vice-Rector for Science and Research– Victor Gristchak, the head of international communication department and work with foreign students – Olena Tupakhina, the dean of the foreign languages faculty of ZNU – Galyna Moroshkina, the director of Romance philology and translation department – Irina Shargai, and also the director of “Alliance Française” office in Zaporizhzhya – Lyudmyla Bogdanovska were at the meeting. 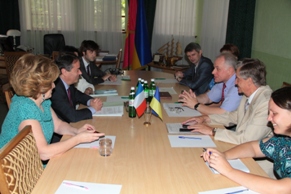 The dean of foreign philology faculty – Galyna Moroshkina told to the Extraordinary and Plenipotentiary Ambassador of France about work of Foreign Languages Intensive Study Centre of ZNU and emphasized that the preparation of our students and lecturers of all faculties for future educating in France is taken the important place among other directions. So, the professor from Université du Maine (le Mans, France) will arrive to ZNU for the first time on the next academic year and he will work with students of our university within three months.
The Vice-Rector for Science and Research– Victor Gristchak told about the international programs and grants in which students of ZNU take part, and also emphasized that this year ZNU received the Grand Prix and the corresponding diploma in the nomination – “The International Partnership in the Fields of Education and Sciences” at the international specialized exhibition “Education and Career-2013”.
At the end of a meeting the rector of ZNU and the Extraordinary and Plenipotentiary Ambassador of France considered the possibilities of further partnership development and after they exchanged keepsakes.