In ZNU continued active preparations for the new academic year 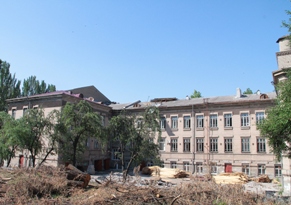 At the height of the summer season in almost all buildings of ZNU undergo renovations on modernization and heat insulation of premises and buildings. Meanwhile Maintenance and Supply staff is working on campus organization and on technical upgrading of the University.

Thus in 3rd academic building of ZNU work is continuing on a full conversion of basement: the replacement of water pipes and heating, sanitation, and flooring. 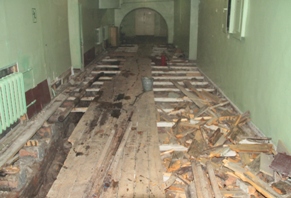 In rooms 503-505 of the sixth educational building going on complete restructuring of classrooms,
windows and doors replacement. Also, there is a preparation for modernization of the facade of 4th academic building. The next step, which planed Maintenance and Supply staff is to replace the windows in the rooms 308-310 of this academic building.
In the sports complex of ZNU have repaired several rooms, the tile was replaced in shower rooms, made ​​waterproofing between showers and audiences. Some work still continue until the end of summer: will be installed spillway system and made outer slopes. 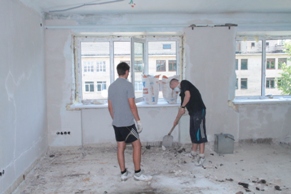 Along with repair work carried out renovation and modernization of the technical facilities of the University for the learning process. This year in ZNU was equipped two language laboratories and four computer labs by 60 units of copying equipment, printers and more than a hundred new computers.
On the campus were conducted comprehensive work on clearing of the territory from old trees. Thanks to the efforts of Maintenance and Supply staff going on greening of the campus. This season generally planted over three thousand flowers. 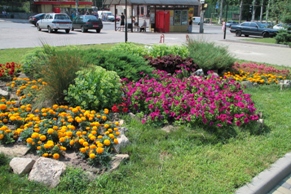 In advance in the university have begun work on energy saving. Now, going on updating and replacement of software on automation heating of the University and replacing of old windows and doors in rooms and classrooms of educational buildings. Approximately 200 new plastic windows are installed in buildings of ZNU, and work in this direction continued.

ZNU invited employees and students to a summer holidays to Kyrylivka
In ZNU staircase in the 2nd building was modernized and lifting pipes in a dormitory were replaced
In ZNU was held a meeting of the Rector Mykola Frolov with students
The territory of ZNU now decorates "Painter's flowerbed"
Vice-Rector for Maintenance and Supply Serhiy Kushnir held a lecture on energy saving
© 2018 ЗНУ Запорізький національний університет, 69600,
м. Запоріжжя, вул. Жуковського, 66,
Відділ діловодства тел./факс +38 (061) 228-75-08
Приймальна комісія тел. (061) 228-75-38 та (061) 289-12-68
Офіційна пошта