In ZNU finished the qualifying round of "Dance flashmob" 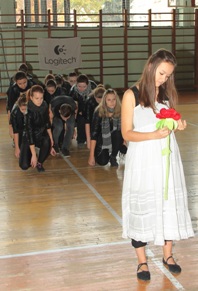 October 31 in Zaporizhzhya National University held the last day of the traditional qualifying competition of freshmen "Dance flashmob", organized by the Center of cultural and mass work. 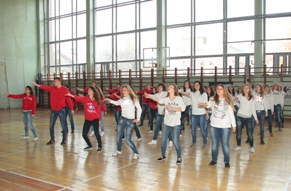 fabulous costumed performance.
First-year students of Faculty of Economics impressed the audience with their choreographic staging, which differed synchronicity of movements. In addition, at the beginning of their perfomance, they created a shape in the form of a smile, and at the end - the letter "E", from which begins the name of their faculty.
All performances of students accompanied by loud applause of spectators and fans who pre-prepared posters to support their comrades. 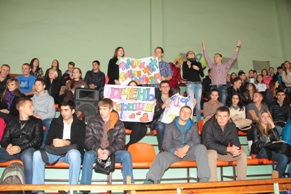 In today's competitive day, according to the Center of cultural and mass work, was collected about 200 UAH in support of our university students who need medical care.
Already on November 14 during the traditional competition "Let's introduce myself: first year" will be announced the winners of the "Dance flashmob".
We remind that anyone can vote and support their favorite team online vk.com in the community ckmr_znu.

In ZNU congratulated students of all universities from Zaporizhzhya on Tatyana's Day
In ZNU held the opening of university Christmas Tree
In ZNU held a report-anniversary concert of choreographic studio «D.A.L.S.»
In ZNU under the campaign "Against drugs!" was screened film
In ZNU held ¼ of the final of Open League of Club of the witty and creative for the Cup of Rector
© 2018 ЗНУ Запорізький національний університет, 69600,
м. Запоріжжя, вул. Жуковського, 66,
Відділ діловодства тел./факс +38 (061) 228-75-08
Приймальна комісія тел. (061) 228-75-38 та (061) 289-12-68
Офіційна пошта