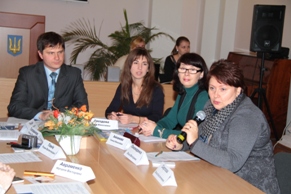 Yesterday at 8th academic building of ZNU (Drobyazko Palace of Culture) held a meeting of the Coordination Council on the family, women, maternal and child health issues under the Chairman of Zaporizhzhya Regional State Administration. The organizers of the event were members of Zaporizhzhya Regional State Administration and the Faculty of Social Pedagogics and Psychology of ZNU, with the assistance of government and civil society organizations of social protection. The meeting was held within the passage of the annual international campaign "16 Days of Activism Against Gender Violence" (November 25 - December 10).

To discuss pressing issues of social protection of population, including the prevention of family violence, child abuse, helping the elderly, etc., and develop a strategy for inter-agency cooperation of public authorities and non-governmental organizations, which gathered together representatives of departments and divisions of the regional and city administrations of Zaporizhzhya and Energodar, public leaders, clergy and students of the Faculty of Social Pedagogics and Psychology.
Opened the meeting Dean of the Faculty of Social Pedagogics and Psychology, associate professor Olga Ponomarenko. She welcomed the participants and thanked them for their trust and support in the work of the Faculty. With a welkoming speech she adressed to the participants of this important event on behalf of the Rector of ZNU Mykola Frolov. Olga Viktorivna in her speech said that it was not only the faculty of SPP serves as the theoretical basis for training specialists of social sphere, but also for many years, starting in 2000, cooperates with social agencies and NGOs. 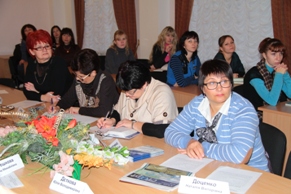 Meeting of the Coordinating Council headed by the Director of the Department of social protection of population Regional State Administration Igor Meschan. On behalf of the Deputy Head of Regional State Administration, Andriy Gamow thanked the Faculty of SPP and ZNU for many years fruitful cooperation. Today a lot of attention at the national level is being given to the development of social sector and civil society development. Igor Viktorovych said that Zaporizhzhya is actively implemented social initiatives of the President of Ukraine Viktor Yanukovych and Minister of Social Policy of Ukraine Nataliya Korolevska. He also spoke about the directions of Zaporizhzhya Regional State Administration of social protection of population and the activities that are carried out to prevent violence in the family and society.
Thus, in order to respond effectively to complaints and appeals in the area, there are numerous local and regional coordinating councils. Among them - a newly formed advisory council for the protection of the family, women, mother and childhood under the Chairman of Zaporizhzhya Regional State Administration. Also in our region are implemented government programs to support family gender parity, including "The complex regional program of rehabilitation and recreation for children, family support, youth, gender parity and combating trafficking in human beings for 2012-2016". For low-income and large families held the action "first grader" extensive measures to Family Day and Mother's Day, dedicated to issues of social protection round tables, etc. In regions performed constant testing of social services work. A large number of social workers in this field are trained in ZNU.
With each year the amount of social assistance to citizens of Ukraine also increases the number of problems related to these issues. And in order to solve their most important interactions and coordination of various government and non-government organizations that exist in our country. That is why such joint meetings of coordinating councils are designed to produce a strategy for social development while they should be made proposals for government planning in the social sector and help to solve pressing issues that constantly puts civil society that is developing. 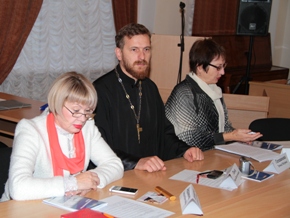 About work experience in the community and measures to prevent violence in the family told the audience Head of the Department of Family and Youth of Energodar City Council Galyna Anikanova. So, within the campaign "16 days of activism against gender violence" in Energodar held a competition of children's drawings, the winners will take part in the Ukrainian event "Stop the Violence". The work of the social support of elderly people helping city public organization "Ukrainian" and "Russian Club" measures to protect order and education of young people have undertaken the representatives of the Cossacks - acted a "School Dzhur", social formation on public order protection "Bulava", and members of the clergy helping in the education of children and family members and others.
To the audience also addressed head of the Department on work with family of Zaporizhzhia and Melitopol diocese, priest Roman Piven. He outlined the features and benefits of spiritual motivation in the field of education of the individual and offered assistance to the clergy in the implementation of social and educational work among the population. Leading specialist of the Department of Methodological Provision of social work in Zaporizhzhya Regional Centre of Social Services for Family, Children and Youth Olena Horoshkova reported on the main lines of social assistance to the population of our region.
She also emphasized the importance of interaction between social structures of the media in educating members of civil society. Teacher of Zaporizhzhya school "Osnova" Svitlana Rozenkova described the social movement "Humane pedagogics", which acquires the development and popularity in various countries, including Ukraine.
With the report also performed Chairman of the Board women's crisis center "Garmoniya" Tetyana Lazareva, Associate Professor of Education and Psychology educational activities Tetyana Golovanova, Head of the Charitable Foundation "Spodivannya" Natalya Dotsenko and others.
As a result of the Coordinating Council, its participants agreed to take measures to strengthen inter-agency cooperation between public authorities and non-governmental organizations (roundtables discussion, meetings, meetings of coordinating councils, interaction with the media, etc.) to expand educational and outreach to the public for the purpose of prevention of violence, and to create a Center for gender Education at the Faculty of Social Pedagogics and Psychology of ZNU. 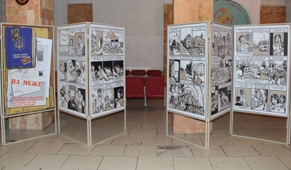 At the end of meeting of the Coordination Council Director of social protection of population Regional State Administration Igor Meschan promised to report to Zaporizhzhya Regional State Administration on the results of the Council and make suggestions for planning comprehensive measures of social protection population, and offered to perform the interaction of the Faculty of Law and of SPP for preparation of new structure specialists, which promote the development of civil society on the basis of gender parity.
To the meeting of Coordinating Council in the hall of 8th academic building was prepared Specialized Exhibition Stand, where a comic book were presented 7 real stories of people affected by violence and social slavery.