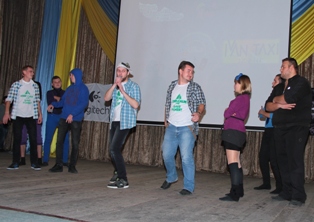 November 27 in Zaporizhzhya National University held ¼ of the final of Open League of Club of the witty and creative for the Cup of Rector. For the opportunity to continue to struggle for the title of the best players of Club of the witty and creative (hereinafter referred to as - CWC), this time 10 teams competed from Zaporizhzhya National University, Zaporizhzhya National Technical University and Zaporizhzhya Aviation College. Before the audience and jury members showed their talents team "Horse on E5" (Economics and Law College of ZNU), "Home-style" (ZNTU), "Sandals" (ZNTU), team "Law Faculty", "Communal" (ZNTU) , "Banana" (Faculty of Journalism of ZNU), "Oak, tree, pine" (ZNTU), "Despair" (ZNU), "What's the difference?" (team of ZNTU and Aviation College), "Universe" (ZNU). Traditionally, the organizer of the event, which eagerly waiting for all supporters of CWC, became the Center of cultural and mass work of ZNU. 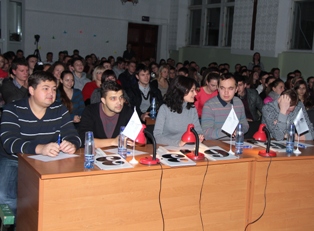 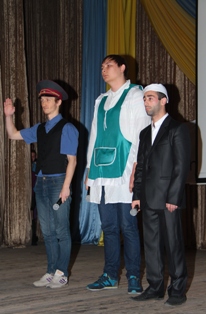 and pre-professional training of Classic Private University Dmytro Yermolenko. However, this time occurred changes in jury composition: this evening as a member of the jury debut lecturer of the Faculty of Journalism and author's script for CWC team "CSKA" Yuriy Kostyuk. With calculation of points dealt Alina Grushko. Unusually this time was the format of the game: the team was divided into two blocks. And if the first five teams "Banana", "Home-style", "Oak, tree, pine", "Despair", "Law Faculty" competition began with a greeting, then immediately going the contest "Five jokes about ...", then the second block of the game scenario looks somewhat unusual. At first teams "Communal", "Sandals", "Horse on E5", "What's the difference?" and "Universe" also amused the audience with their five jokes on a particular topic, and then presented their congratulations. 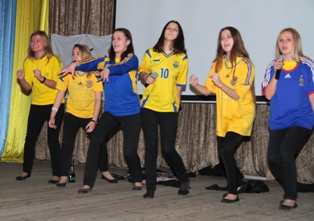 By the way, the subject of jokes teams have offered a variety: it seems that CWC equally aptly joke on fairy tales, family, sports, showbiz, Gipsy, progressive grandmother Tamara Vasylivna and of girl from hostel Svitlana.
As for the contest greeting, here, as always, teams quite differently approached the task to please the jury and the audience, they demonstrated their dance, vocal and dramatic talents, played the funny scenes, even resorted to black humor.

It should also be recalled that during the Festival of CWC that accompanied the opening of the new season on October 30th, for the best performances of 0.1 points received teams "What's the difference?", "Banana" and "Sandals", teams "Despair" and "Law Faculty" - received 0,2 points. These extra points may have affected the results of the intense struggle for access to the next stage of the competition and helped some teams.
However, unfortunately, despite the extra 0.1 points a team of "Sandals" (ZNTU) as well as the team "Oak, tree, pine"(team ZNTU and ZNU) left the race. So the next time for the Cup of the Rector will continue to struggle the players of 8 teams "Home-style" (ZNTU), "Banana" (Faculty of Journalism of ZNU), "Law Faculty" (ZNU), "Communal" (ZNTU) , "Banana" (Faculty of Journalism of ZNU), "Oak, tree, pine" (ZNTU), "Despair" (ZNU), "What's the difference?" (team of ZNTU and Aviation College), "Universe" (ZNU).