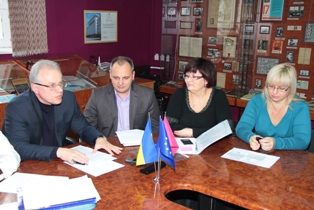 November 28 in Zaporizhzhya National University held a regular working meeting of representatives of the administration of our university with activists of the Student Council of ZNU. The meeting was attended by the Rector Mykola Frolov, Vice-Rector for Maintenance and Supply Sergiy Kushnir, Rector’s Assistant Nataliya Voronova, Acting Rector’s Assistant of Public Relations and Media Galyna Mykytiv, Head of the Department of Educational Work Svitlana Kondratenko, Deputy Director of sports and recreation complexes of ZNU Olexandr Petrenko, representatives of Student Council of ZNU Faculties and hostels.

Chairmans of the Student Council Faculties previously prepared list of current issues on the organization of the educational process and student life that concern students of our university.
So, students of the Faculty of Philology addressed to Rectorate with a request to increase the number of books on artistic subscription of the Scientific Library of ZNU, as some copies is only in one instance. Mykola Oleksandrovych supported this request and said that the university is a working group that is considering a comprehensive modernization of the Scientific Library. 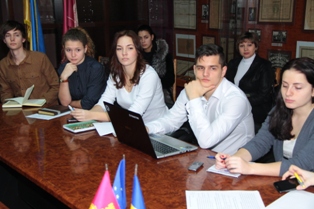 Also students concerned about the form, in which will be held English classes: as extracurricular or as a part of the learning process. Mykola Frolov said that the administration is challenged to make ZNU as regional European university, which will fully satisfy all the needs of students. It is expected that students will learn a foreign language every year as a part of the compulsory program. In addition, all visitors will be able to learn foreign languages optionally. Also the Rector said that today at the university were formed two groups for studying English and one group for studying French, in which ZNU teachers are trained.
In addition, during the meeting Mykola Oleksandrovych said that our university has been activated the process of returning of students to auditoriums. Every day, representatives of the Department of educational work checked attendance of ZNU students. Today we can talk about some positive results of this work - indicators of students attendance have improved. 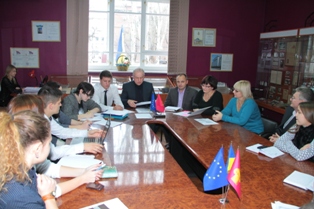 In addition, during the meeting the issue of renovation works in the 6th academic building in the gym of 2nd academic building of ZNU, installation and connection of Wi-Fi networks in all university buildings, conducting career guidance to prospective students, and others. Together the leadership of our university and supply representatives of ZNU gradually resolved these problems.
In turn, Rector Mykola Frolov said about the readiness of ZNU hostels to cold season. Chairman of the Student Council of hostels listed all work performed for warming of premises, and the problems to be solved in the future.
In conclusion, Mykola Oleksandrovych thanked Student Government of ZNU for quite informative talk on various areas of life of the university and promised that all identified issues are resolved by the leadership of ZNU.