At the Faculty of Law held brain-ring of Constitutional Law 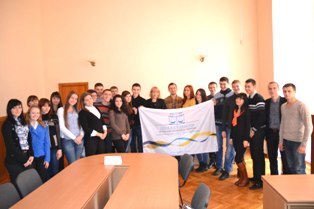 November 28 at the law faculty of Zaporizhzhya National University held a brain-ring with the knowledge of the Constitution of Ukraine. Organizers of the event were representatives of Zaporizhzhya branch of Students League Lawyers Association of Ukraine, with the assistance of dean of the Law Faculty of ZNU and Candidate of Law Sciences, senior lecturer in constitutional and labor law Nataliya Brovchenko. This - the selection stage of All-Ukrainian competition brain-ring, which is traditionally held in Odessa.

This year the event was 7 teams. Rules remain the same: race held in 3 rounds. In the 1st round, the teams invited to 5 questions, the game follows the scores. Participants during 1 round, double sit at the gaming table. As a result of 1st round to semi-final 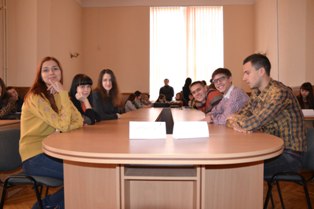 obtained 4 teams. In 2nd round to teams offered 10 questions whose complexity increases of each round. The game is "in flight". Teams that are eliminated, competing for the 3rd place. In the final, rules dramatically change the number of questions is not limited. Member of team that correctly answers the question, it appears from the table. The game is considered completed when before the table not remained any player.
Chief Justice of the competition was Ph.D. in Law, senior lecturer of the Department of Constitutional and Labour Law of the Faculty of Law of ZNU Nataliya Brovchenko. The composition of judicial board also included Head of Zaporizhzhya branch of Students League Lawyers Association of Ukraine Ivan Shumeyko, and a members of the Organizing Committee of brain-ring were Anatoliy Stepashko, Victor Vyshnyakov, Nataliya Malyshenko.
By the semi-finals of the competition took teams, "Femida", "Legal trinity", "Antanta" and "Triple Alliance". As a result of the stage battle for 3rd place between teams opened "Femida" and "Law trinity", which resulted in "Femida" took 3rd place and "Law trinity" - 4th place in accordance. 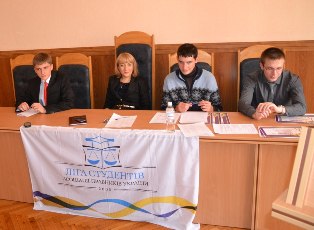 In the final meet "Antanta" and "Triple Alliance." The last stage of the competition, as it turned out, required from participants not only knowledge of the provisions of the Constitution of Ukraine, but also ideas about tactics and strategy, as the last participant, who remain, has to know the basic law perfectly. That is, before the final teams have to decide on the order in which participants will leave the contest table. Following the results of final contest team "Triple Alliance" (team members - Vladyslav Blond, Oleksiy Renhevych, Sergiy Tyapkin) won the victory.
At the end of the competition held a ceremony of awarding.