Pavlo Volvach: "This university occupies a special place in my life" 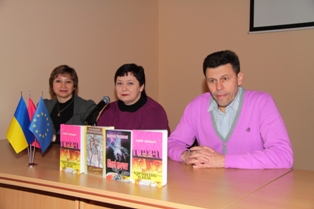 December 3 Zaporizhzhya National University visited the famous poet and prose writer, one of the most popular contemporary local writers Pavlo Volvach and writer, publisher, social and political activist Volodymyr Shovkoshytny. During the meeting with teachers and students of Faculty of Philology and Journalism, artists presented their novels: "Khreschatyk Plaza" of Pavlo Volvach and "The White gyrfalcon" of Volodymyr Shovkoshytny.

307 audience of 3rd academic building of ZNU just embraces everyone to communicate with the writers. Welcoming the honorary guests of the University, Dean of the Faculty of Philology Tamara Khomiak noted that this meeting is also interesting, that our compatriot Pavlo Volvach conventionally represents northern Ukraine, and Volodymyr Shovkoshytny who was born in Kiev region represents south Ukraine. Therefore, students can not only compare the writing style, but also the manner of performance and temperament of representatives of the two regions of the country. 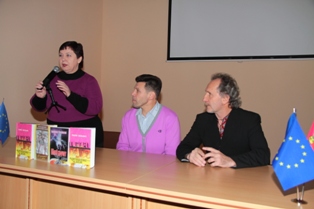 Pavlo Volvach, addressing to the audience mentioned: «I am pleased once again to come to Zaporizhzhya National University, enjoyable, not only because I have the right to say what was in the walls of higher education. In fact, this university occupies a special place in my life, it had a great influence on my destiny. I have a deep appreciation and love to treat its former teachers, many of which are currently in the audience. I am pleased to communicate with my young compatriots. The greatest achievement of our country since independence - it is what we grew up such a wonderful youth. I am really interested in your opinion about my novel, I hope that during the year we will meet again and we can discuss over it».
Publishing house of Volodymyr Shovkoshytny "Ukrainian priority" was the third, which turned Pavlo Ivanovych with his second novel. Two earlier refused to publish "Khreschatyk Plaza", which is based on the author's experiences working at the radio station "Freedom" in which, by definition of Pavlo Volvach, said "about the life". The reason for failure is that the book masterfully describes many well-known personalities and recognizable situations. The book concludes with a description of the Orange Revolution and the open ending. Its protagonist, though endowed with certain autobiographical 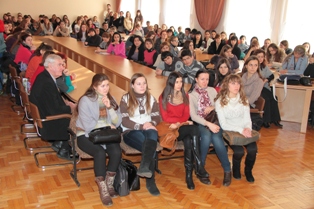 features, but is not identical to the author, noted Pavlo Ivanovych.
Volodymyr Shovkoshytny noted that the task of publishing "Ukrainian priority", considers the publication "essential", really high-quality literature that will have an impact on our culture. It is to these works implicitly refers Volodymyr Fedorovych also new novel by Volvach. «This is a completely different style, a different language than the famous "Klyasi", - he emphasized. – In the first novel by Pavlo Volvach it rough, just as the life of its characters - laborers of the industrial city. "Khreschatyk Plaza" a completely another novel, but felt that it wrote Zaporozhets, the one who comes from Zaporizhzhya region, who created "Klyas". So writing about our life can not any other contemporary Ukrainian writer».
Volodymyr Fedorovych also presented his book - the novel "White gyrfalcon", which refers to the Ukrainian Insurgent Army UNA-UPA. He emphasized that aims to destroy the myths associated with this period of history and this military group. In particular, the fact that the UPA was xenophobic organization, because, according to archival material in 1943, 40% of the soldiers of the army were not Ukrainian, but representatives of other nations. To write this piece, Volodymyr Fedorovich 11 years studied the materials of Ukrainian, Russian, Polish and German archives. In this book presentations were attended by UPA and their descendants, historians and journalists, and no one pointed out any factual errors. And yet, according to the author, it is - a story of love that conquers even against those terrible times and events. 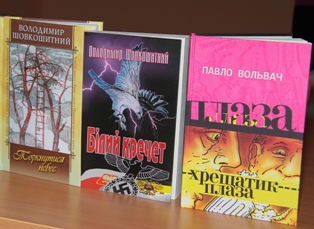 In addition, during a meeting with students, held a presentation of books by other authors published by "Ukrainian priority", in particular - the latter cumulated after the author's death, the novel of Oles Ulyanenko as well as books of Vasyl Stus, Anatoliy Dimarov, Nadiya Stepula etc..
Volodymyr Shovkoshytny, just like Pavlo Volvach not first visited Zaporizhzhya National University, also says that happy to visit it again.
Finally, the Dean of the Faculty of Philology meeting Tamara Khomiak made ​​gifts to both artists in memory of our university, also congratulated Pavlo Ivanovych with the 50th anniversary, which he recently celebrated.
In conclusion, the students were able to purchase books for the publishing house prices and get autographs of writers.
This event interested representatives of the local media who interviewed the famous artists, putting them questions about their novels and excitement of arrival in Zaporizhzhya and meeting with the youth.