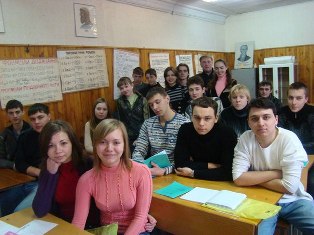 Iryna Mykolayivna reminded senior pupils that soon they can expect a difficult life choices, and they all now have to decide to the fact - who they will be in the future adulthood. She told the audience about Zaporizhzhya National University, focusing on its prestige in the educational market as in Zaporizhzhya region and beyond. Also introduced the upcoming entrants with Faculties and specialties, scientific, educational and material-technical basis, interesting and socially useful information on student life.
However, in order to become university students, it requires some preparation. It is this second part, to which was devoted the speech of Iryna Mykolayivna. She introduced to high school students the rules and components of the entrance campaign in 2014 for future entrants of ZNU created all conditions for the qualitative development of the foundations of their future profession and entrance to our university. And in order to simplify this process, high school students invited to undergo training at the preparatory department to summarize knowledge before passing EIT. Also, to simplify the process of psychological adaptation of children to pass EIT, the University offers free trial training in all subjects, which will be held every Sunday in March 2014.
Special attention was demand to the meeting with high school students in Novoaleksandrivka school, where hold the regional competition of the tournament, "What? Where? When?". The meeting was attended by representatives of ten schools - the competitors - the best pupils of 10th-11th forms.
In conclusion of her speech, Iryna Mykolayivna noted, that only joining general effotrs of future entrants and our university, we could reach the main aim – to receive the desired higher education!

Eleventh grader Denys Shushmyntsev: "Achieve your goal and don’t be afraid of any obstacles."
The project “English Speaking club: cinema on Wednesdays” with the participation of school students continues its work on the Faculty of Social Sciences and Administration
Listening trainings for high school students of Zaporizhzhia has begun on the Faculty of Foreign languages
At ZNU 5584 people passed free trials trainings on EIT-2016
For pupils of Zaporizhzhya held an open lecture to the century of discovery of theory of general relativity
© 2018 ЗНУ Запорізький національний університет, 69600,
м. Запоріжжя, вул. Жуковського, 66,
Відділ діловодства тел./факс +38 (061) 228-75-08
Приймальна комісія тел. (061) 228-75-38 та (061) 289-12-68
Офіційна пошта