At the Physics Faculty held a final of the game "What? Where? When?" 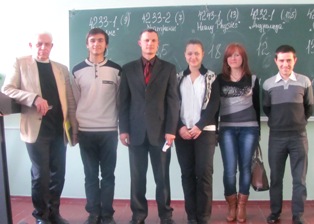 At the Faculty of Physics of Zaporizhzhya National University held a final of the intellectual game "What? Where? When?". The competition was held in two stages: first - selection round - lasted from 9 to 13 December, the final stage was held on December 19. 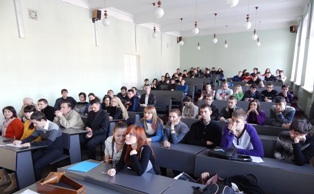 Faculty, 3rd year student Dmytro Karpenko and Head of the Scientific Community of Students and Postgraduates of Zaporizhzhya National University, 4th year student Valentyna Kucheruk.
Among the participants were teams from all academic groups of 1st-4th years. In the first round, 5 teams competed with students of 3rd and 4th years, in the second round competed also 5 teams, which included students of 1st and 2nd years. In the final were two teams of students of 1st and 2nd years ("Heavy Physics" and "A"), and two finalist teams were 3rd and 4th years students ("Cluster" and "V"). 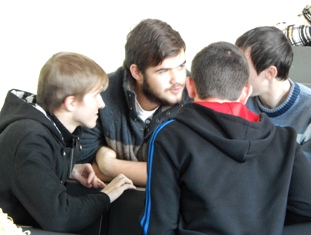 During the tournament, participants were offered the theoretical questions, demonstrations experiments and video demos. Students are shown a fairly high level of knowledge of the physics and erudition. Won the team of 1st year, of the specialty "Applied Physics" «Heavy Physics», consisting of Roman Lutay, Yury Radyev, Oleksiy Chaban, Andriy Tovstanovsky, Volodymyr Hupovky and Serhiy Vovk.
This team will compete in the Super Final with a team of teachers during the celebration of the Faculty of Physics. All participants in the tournament received gifts from the deanery and certificates of merit.

Valentyna Kucheruk,
Head of the Scientific Community of Students and Postgraduates of Zaporizhzhya National University

At the Faculty of Law held intellectual competition for the title of "The most1st year smartest student"
For pupils of Zaporizhzhya held an open lecture to the century of discovery of theory of general relativity
Urban methodological seminar for school teachers and university professors I-II levels of accreditation was held at the Faculty of Physics
At ZNU held a working meeting of the Coordinating Council of Scientific Society of Students and Postgraduates, Postdoctoral Students and Young Scientists
At the Faculty of Physics held regional conference
© 2018 ЗНУ Запорізький національний університет, 69600,
м. Запоріжжя, вул. Жуковського, 66,
Відділ діловодства та архіву тел./факс +38 (061) 228-75-08
Приймальна комісія тел. (061) 228-75-38 та (061) 289-12-68
Офіційна пошта