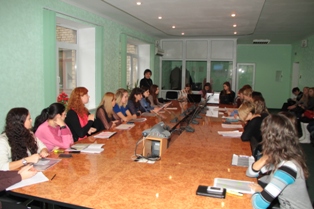 December 26 our country celebrated the 115th anniversary of the birth of the "king of Ukrainian rhyme" talented poet, playwright, novelist and translator Yevgen Pluzhnyk. Students of the Faculty of Philology of Zaporizhzhya National University under the direction of associate professor of Ukrainian Literature Department Oksana Protsenko, December 27 held a recital in memory of Yevgen Pavlovych, his interesting and many-sided literary activities and short tragic fate.

The organizers of the event were students Viktoriya Omelchenko, Yuliya Pysmenna, Anastasiya Galko and Maryna Denysenko. Video presentation which accompanied by performances of participants of the event, prepared Kateryna Chorna and Kateryna Sulym, and Valentyna Vorona created wall newspapers devoted to the life and career of the writer. 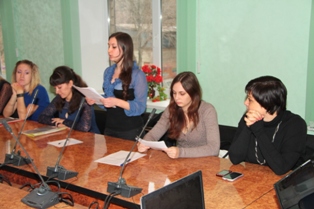 During the event with their reports performed Iryna Nadzelska, Natalya Yurchenko, Olena Fisun, Kateryna Tverdenko, Yelyzaveta Polischuk, Yuliya Dudnyk, Tetyana Kozlova, Alyona Matiychuk, Victoriya Teodorova, Yaroslava Nikolenko, Lyudmyla Bolshova, Roksolana Bilenko, Yuliya Romanova, Ilona Drozdova and Diana Artemenko.
Speakers highlighted the major milestones of the writer's biography, focusing on the love story of Yevgen Pluzhnyk to his wife Galyna Kovalenko, his serious illness and tragic death, a typical day for writers of the Executed Renaissance. Also, students analyzed the thematic and stylistic features of creative works of the writer, who considered himself as a disciple of Maksym Rylsky, but, according to Maksym Tadeyovych, one of those students who are ahead of the teacher.
One more highlight of the event was the publication of the survey results in social online network "VKontakte" held by Kateryna Rybak. She decided to find out how well-known students of Yevgen Pluzhnyk and exactly how 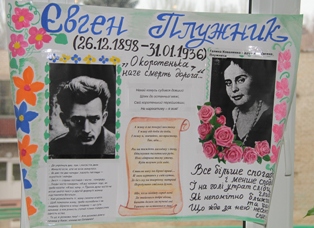 refer to his works youth readers. The result was that the question "Do I need to study the work of this writer in schools and universities?" - 58% said replied yes, and 23% said that it is not necessary. But the question of who this Pluzhnyk Yevgen, half of the respondents confidently replied that he was not only a poet but also a translator, playwright and novelist, another 27% said that they do not know his work, but heard a name, and 4% indicated that although not familiar with his poetry, but would like to learn more about his creative heritage. According to Kateryna, some of the survey prompted students to find works of Yevgen Pavlovych and share their experiences of acquaintance with them.
Completed the recital evening with vocal performance of the Faculty's "star" Tetyana Didenko, who performed the song "This is my land".
In conclusion of the event, associate professor Oksana Protsenko thanked the participants for the fruitful and creative work both in preparation for the evening to commemorate Yevgen Pluzhnyk and throughout the semester.