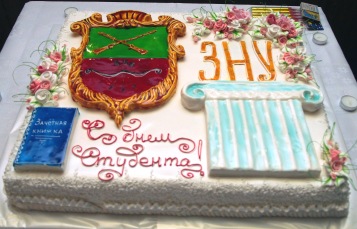 January 24 at Zaporizhzhya National University conducted urban music and entertainment show timed to the Students' Day. In the cafe "Tetyana's Day" brought together representatives of all higher educational institutions of the city, first of all - students, whose name is Tetyana. Yesterday, they was welcomed most of all, because January 25 Tetyana's, who studying in universities have a double celebration: holiday Tetyana is the patroness of all students youth.

Organizers of the event - staff of the department on work with youth and families of the Department of Education and Science of Zaporizhzhya City Council led by its Head Igor Filipenko and ZNU Center of cultural and mass work specialists under the chairmanship of director Yuliya Yanko – took care of interesting and full of surprises program that would ensure a good mood all those present. 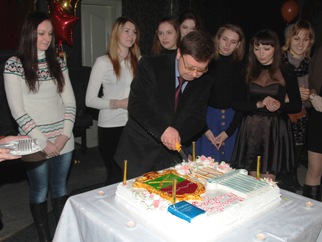 Hosts of the event - ZNU students Kateryna Danshyna, Kateryna Chernysh, Mykola Kopylovsky and Yehor Zakharov – reminded the audience about the history of holidays: on the day of St. Tatiana 349 years ago the Empress Elizabeth issued a decree on the establishment of the first university in the Russian Empire.
They are also during a show in a humorous manner welcomed all those present in the hall on behalf of students of famous historical figures - Oleksandr Suvorov and Archimedes, on behalf of beloved by many literary characters of Sherlock Holmes and Dr. Watson and, of course, on behalf of the students. From the stage wished all those present to get beloved profession, make scientific discoveries, to receive the prestigious scholarship and be successful. 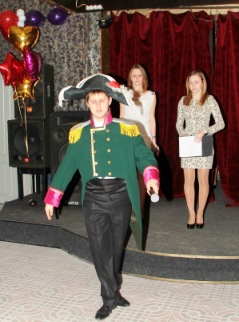 The culmination of the evening was the performance of an honorary guest – Head of the Department on work with youth and families of the Department of Education and Science of Zaporizhzhya City Council Igor Filipenko. On behalf of City Mayor of Zaporizhzhya Oleksandr Sin and the entire City Council, he wished success to all students and ensured that the local authorities will always support them - the best of the best representatives of the youth of our city Zaporizhzhya. Particularly Igor Serhiyovych solemnly congratulated all those present in the hall Tetyanas with their Angel Day. It is they who first got from his hands a big piece of a festive cake, decorated with the emblem of the city, a symbol of ZNU and depicting with academic records, which prepared the cafe staff of "Tetyana's Day". Also, all Tetyanas received gifts from Igor Filipenko. Also congratulated Tetyana Skyrda from ZIEIT, who January 24th celebrated her birthday.
One more gift for the participants of the holiday were the performances of vocalists studio "Kantylena", accompanied by dance compositions of group members «DALS» of the Center of cultural and mass work of ZNU. 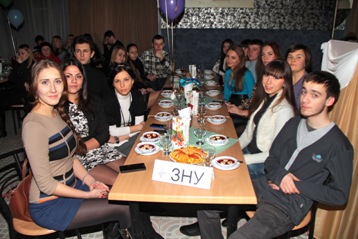 Day of Knowledge in ZNU gathered first-year students of all courses and colleges
Nearly 200 graduates of the College of Economics and Law were solemnly awarded with the certificates of associate degrees
Ceremonial presentation of diplomas took place in the Zaporizhzhia Metallurgical College of ZNU
Graduates of the Faculty of Philology received master’s degrees in a solemn atmosphere
Ceremonial awarding of diplomas to graduates-masters took place on the Faculty of Foreign Philology
© 2018 ЗНУ Запорізький національний університет, 69600,
м. Запоріжжя, вул. Жуковського, 66,
Відділ діловодства та архіву тел./факс +38 (061) 228-75-08
Приймальна комісія тел. (061) 228-75-38 та (061) 289-12-68
Офіційна пошта