The international conference participants on the history discussed the causes and impact of World War I on the development of countries in the beginning of XXI century.

6 February in ZNU started two days International Scientific Conference "Global political and military conflict in the twentieth century: global and regional dimension (up to 100 anniversary of the First World War)". 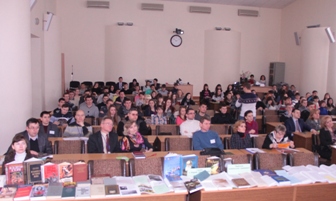 Opened the conference and welcomed the participants Rector of ZNU, professor Mykola Frolov. He stressed the unceasing interest of native and foreign researchers to the events of World War I, which affected the entire course of modern history.
At the plenary session before those present performed academics of ZNU and visitors from other universities. Head of the Department of Contemporary History of Ukraine, professor Fedir Turchenko devoted his presentation to the theme of "The First World War and Revolution in Central and Eastern Europe." Looking at the root causes of conflict, political and economic forces in the region, he showed how slowly the political arena began to leave the national interests of so-called "small nations". These processes were continuing in the last century and current on this time.
D.Sc. in History, professor of Kharkiv National University of the urban economy named after O. Beketov Lyubov Zhvanko in the report "Modern Ukrainian historiography Refugee of the First World War Russian Empire era" 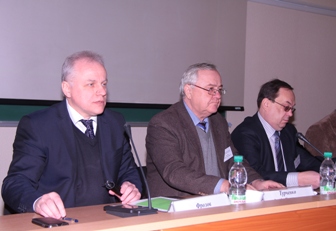 examined the phenomenon of Refugee between 1915 to 1918 and described the role of charities in solving this problem. She also conducted an analysis of the scientific literature on the abovementioned issues. Lyubov Mykolaivna said that ZNU investigation of the history of World War I refugees lot of attention was paid by professors Fedir Turchenko and Halyna Turchenko. At the end of her speech, she presented Fedir Hryhorovych her monograph.
About the project «Mitteleuropa» and conflict of interest the Entente countries and Germany before World War I told D.Sc. in History, professor of the Diplomatic Academy of Ukraine, of MFA of Ukraine Serhiy Troyan. The theme of "Social Conflict in the Information opposition of Germany and the Soviet Union (1941-1945)" highlighted professor, Head of the World History of the National Research Institute of Ukrainian Studies and World History Oksana Salata. The theme of evolution and prediction of historical conflicts revealed D.Sc. in History, associate professor, professor of the Department of Regional

Systems and European Integration of the Diplomatic Academy of Ukraine Vitaliy Kosmyna in the report "Global conflict in the twentieth century: from collision of the countries to clash of civilizations".
In their reports, scientists are not only presented diachronic analysis of phenomena that emerged in the late nineteenth and twentieth centuries and led to the First World War, and discussed the current state of these issues. All at the same time unanimously concluded that today, given the lessons and experience of previous wars and historical conflicts, humanity has all the possibilities to solve problems peacefully.
The participants of the plenary session also expressed gratitude to the organizers of the conference for information saturation event and created the possibility of scientific communication.
It should be noted that prior to the event was published proceedings of the conference "Global military-political confrontation in the twentieth century: global and regional dimension (up to 100 anniversary of the First World War)".
After a break and tour the Museum of History ZNU scholars participated in the thematic sections "Ukraine in the context of the First World War"

and "Sources, historiography and methodology for studying the manifestations of political and military confrontation between the world of XX - beginning of the nineteenth century".
Tomorrow, February 7, will be Meeting of sections "Cultural Mythology conflict, armed conflict and the history of everyday life. Crisis of values ​​of European civilization" and "Diplomacy and international legal regulation of armed conflict".
In conference room of 1st academic building of ZNU conference participants had the opportunity to inspect the book exhibition - scientific publications of scientific libraries ZNU, History Faculty researchers monographs and serial publications on the topics "The First World War 1914-1918", "The problems of national statehood" "Political movement of Ukraine (XX-XXI centuries)", etc..