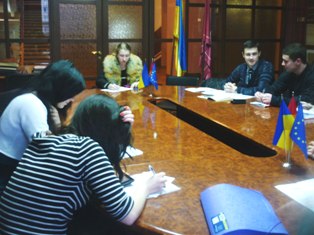 March 5 at the Faculty of Social Sciences and Administration of Zaporizhzhya National University held a game-debate on "The media should be controlled by the state". The event was attended by activists of SCSP and students FSSA. The initiator and host of the game became D.Sc. in Philosophy, professor Volodymyr Skvorets.

The role of the time-keeper was the student of 1st year, of specialty "Political Sciences" Olha Steblyuk, and a judge has assumed her group mate Dmytro Tarytin.
The position of statement defending team "Existence", consisting of Yuliya Yurhina, Olena Moiseyenko and Ruslana Dikhtyarenko. Their opponent in the game was the team "Dolphin", which includes Andriy Kuvatov, Artem Voronov and Valeriya Ovcharova. 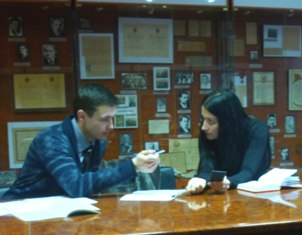 Intelligent competition was quite difficult but interesting. Post proved timely, as caused noticeable resonance among the audience and passionate discussion. During the game, the participants expressed their views as well as cited quotes of famous people. Also in preparation for the event was analyzed legislation and experience of other countries on this issue.
In general, during the discussion was about what they can give to society, independent media and state-controlled media. There were thesis on the impact of media on the public consciousness, and addressed the issue of the validity and relevance of the information provided by mass media.
At the end of the game summed up the organizers and players of both teams in deference shook hands. Despite the fact that the team-winner became "Dolphin", present agreed that the view and the other team has the right to exist.

SCSP of the Faculty of Social Sciences and Administration