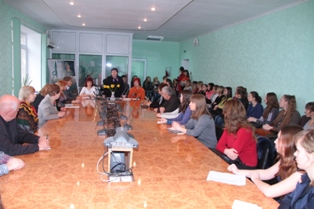 March 18 in Zaporizhzhya National University was held a presentation of the annual Ukrainian contest of young Ukrainian poetry and art song "Khortitskiy Bells" named after Maryna Bratsylo. Event organizers - representatives of the Faculty of Philology of our university - so decided to honor the memory of the famous Ukrainian poet and songwriter, ZNU graduate Maryna Bratsylo, who tragically died in June last year. 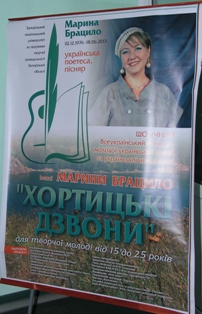 During the presentation, Ukrainian creative competition, which was attended by prominent representatives of the artistic circles of Zaporizhzhya region, the organizers said that the event itself is also devoted to yet another remarkable events literary and artistic life of Ukraine - the 200th anniversary of the birth of world-renowned poet Taras Shevchenko.
At the beginning of the event Dean of the Faculty of Philology Tamara Khomiak emphasized that our land is rich in talented personalities and has always played an important role in the cultural life of Ukraine. Justly famous national poet and social activist Dmytro Pavlychko during his recent meeting with students of ZNU said that the spirit of Taras Shevchenko is inextricably linked to the Zaporizhzhya area and Khortytsya.
«But even among many well-known artists, whose biography is related not only from Zaporizhzhya, but it is with our university, clearly distinguished poetic talent of Maryna Bratsylo, – emphasized Tamara Khomiak. – She as a 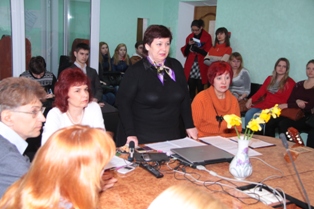 most brilliant artists has been thoroughly gifted person: Maryna was not wrote only wonderful poems but also successfully performed in the genre of art song, has proved during her studies at the university as a talented young scientist. Already in the age of 19 became the youngest member of the National Union of Writers of Ukraine. Maryna has always cared about the young poets, has made great efforts to help them to reveal their talents. That is why we have chosen this form to honor her memory».
Deputy Head of the New Theatre Dmytro Moskovtsev performed the song of his time, presented to him Maryna Bratsylo, and noted that «this Festival comes at a very difficult time, the more important its value in supporting young Ukrainian poetry».

The famous Zaporizhzhya poet Liubov Henba introduced those present at event an organizing committee of the festival, which is led by the Rector of ZNU Mykola Frolov, Deputy Chairman of the Organizing Committee were Dean of the Faculty of Philology Tamara Khomiak and Head of the Department of Ukrainian Studies, for today – ZNU doctorate Olha Stadnichenko. Members of the committee were mother of Maryna - Liudmyla Bratsylo, representative of the New Theatre Dmytro Moskovtsev, head of the literary association of Zaporizhzhya branch of the Union of Writers of Ukraine Hanna Lupynos, ZNU staff Oksana Protsenko, Mykola Stasyk, Iryna Tsaplina and Iryna Protsyk.
Organizers of the contest believe their main tasks of identifying and supporting young talented poets and singer-songwriters, promoting their development, and to promote among pupils and students of poetry and song creation young Ukrainian authors. 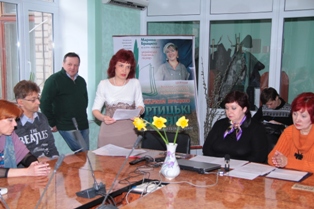 During the presentation, the representative of the organizing committee unveiled associate professor Olha Stadnichenko of the All-Ukraine and the young Ukrainian poetry and art song "Khortitskiy Bells" named after Maryna Bratsylo and announced the composition of his jury. For example, she noted that simultaneously with the start of the contest will begin receiving contest entries in two categories: "Poetry" and "Author's Song", which runs until September 1.
Under the terms of the contest may become a party to the representatives of Ukraine Creative Youth aged 15 to 25 years. Results will be announced on December 2, 2014 - the birthday of poet and songwriter Maryna Bratsylo. Also during the final event, the presentation of the works of authors who participated in the contest and announce the winners of the awards ceremony. The winners will be awarded the Laureate "Khortitskiy Bells" named after Maryna Bratsylo, and they will be awarded certificates and cash prizes. 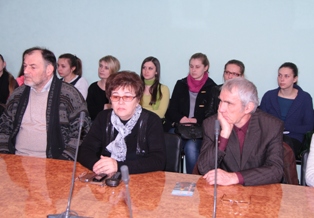 Deputy Chairman of the jury Liubov Henba noted that ZNU - is literary life battery of Zaporizhzhya, because in the corridors of our university there were many famous writers. «I am myself proud to be graduated from this university, and I hope that the competition will help us to discover new talented young poets among its students and graduates», – she said. She also said that the jury was headed by well-known poet, novelist, critic and translator Ivan Andrusiak, his co-chairman became the Kyiv author-artist and social activist Viktor Nesteruk, among his members - Kyiv poet and academic Oksana Kutcenko and editor of "Channel 5" poet Olena Stepanenko.
Kyiv jury members, unfortunately, could not come to west, but they gave their written request to Zaporizhzhya colleagues saluted them with the beginning of a new good cause.
Also at the event was the word of jury members - the famous Zaporizhzhya songwriter and singer Anatolii Serdiuk and director of the theater of art song Olena Alieksieieva. They talked about their familiarity with Maryna and emphasized that this competition - a decent way of honoring her memory.
At the end of the event a student of the Faculty of Philology Alona Matiichuk, Kateryna Rybak, Anastasiia Kokarieva and Anastasiia Chernyts'ka recited famous poetry of Maryna Bratsylo.
Anyone who is interested in the contest, can get more information by ph. # 289-12-82, 067-648-17-17 and on the site www.bratsylo.com.ua