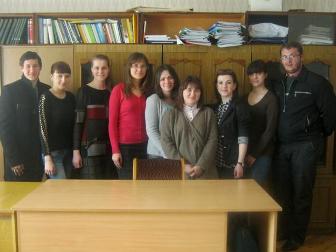 At the initiative of members of the Faculty of History SCSP of ZNU April 2 was held round table meeting on "Joke as a historical source". The event was timed to coincide with the World Day of laughter. The initiator of the meeting was 3rd year student Oleksandr Skrypka that actively explores issues of political jokes as social and cultural phenomena in his scientific exploration.

The roundtable meeting began with Speech of Faculty of History SCSP's Head Olha Sakhno, who welcomed those present on the occasion of humor and wished the meeting participants a good mood and productive work. She stressed that the event is a continuation of research studies devoted to the research of 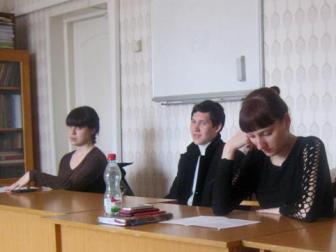 unusual historical sources. After that Olha made an introductory report, during which spoke about nucleation and initial stages of the anecdote as literary, historical and cultural phenomena.
Yuliia Hlushko introduced the audience to the specifics of pre-revolutionary jokes, using illustrative material of satirical magazine of the beginning of XX century.
Next, participants turned their attention to the Soviet-era jokes. Nataliia Blazhko in his presentation showed how reflected in the political joke of the era of Vladimir Lenin and Joseph Stalin particular emphasis on the fact that these figures are very rarely subject to ridicule because of the dominance of rigid ideology. Natalia said that all the anecdotes of this period - a "laughing through tears". 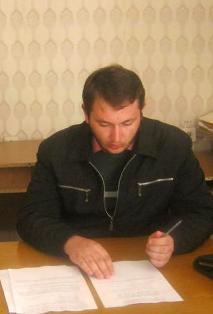 Oleksandr Skrypka highlighted in the report during the "thaw" and "developed socialism", citing specific examples of highlighting political miscalculations and personal flaws Khrushchev and Brezhnev in the light of national humor.
Student Svitlana Salakhan described how, in the popular mind through anecdotes reflected the challenges of "perestroika", analyzing the change in attitude of the Soviet people to Mikhail Gorbachev on expectations that the young general secretary will bring the country's system, acute satirical criticism of his policies.
The participants also drew attention to the way in which political issues of the present day reinterpreted jokes. Anastasiia Hretchenko offered at the discretion of the audience anecdotes devoted sharp contradiction of the initial phase of independence of Ukraine. Mariia Shtenhelova demonstrated how Ukrainian people live on the current political crisis, analyzing the "funnies", which recently widely spread in social networks.
The round table discussion was completed, during which participants exchanged views on the cognitive abilities of a joke as a historical source and the prospects for its use in studies of various kinds.