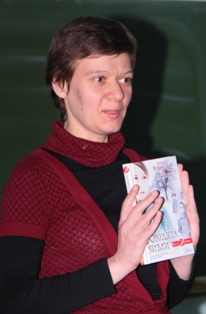 April 8 in Zaporizhzhya National University was held a presentation of Dara Kornii's and Tala Vladmyrova's book "Winter cuckoo", which was attended by one of the authors of the work - of regional academic editor of the newspaper "Zaporizhzhya University" Tamila Tarasenko (alias - Tala Vladmyrova). The meeting with her attended teachers and students of the Faculty of Philology and Faculty of Foreign Languages ​​and representatives of the creative communities of Zaporizhzhya.

At the beginning of the event Dean of the Faculty of Philology Tamara Khomiak introduced the guests of the audience, which once graduated this Faculty and now works in ZNU. Tamara Volodymyrivna also told about another author's novel - Lviv writer Dara Kornii, for whom this book - the sixth, but the first written in collaboration. So, Tamara Khomiak noted that several young scientists who wrote under her leadership works for the Small Academy of Sciences, have chosen to study just this writer's novels, in which the intertwined stories of contemporary and mythological component. 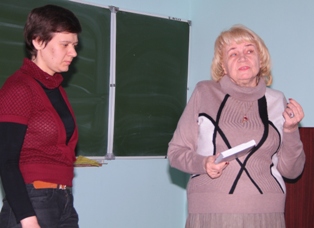 Associate professor of German Philology and Translation Department Valentyna Botner shared with readers her thoughts on this work. In particular, she noted in it the characteristics of the genre as "the minimalist novel" and to contemporary literature in general.
During a meeting with readers Tamila Tarasenko talks about how it was her familiarity with the co-author of the novel on the literary website; under what circumstances they decided to try to write an essay about the features together and creating this novel, including the origin of its name, time space of the work, especially the cooperation between the two 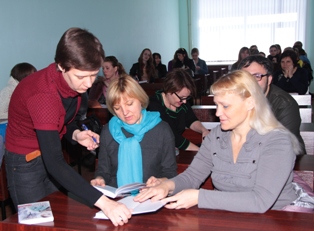 colleagues who live in different cities, the stages of cooperation with the publishing house, etc.
Also, author responded to numerous questions from the audience. Among other things they were interested in the product mix of mythological characters, detective component, the description of everyday life and love line in the novel. Finally Tamila Tarasenko shared her creative plans and thanked those present in the audience for the interesting question and a warm atmosphere in which the meeting took place.
At the end of the event there was an autograph session of the writer.