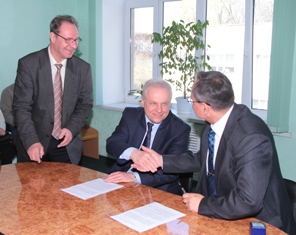 April 15 to Zaporizhzhya National University had made their way the First Deputy Mayor of Zaporizhzhya on the activities of the executive Dmytro Svirkin, Head of Economic Development of KE "Zaporizhzhya City Investment Agency" Vadym Demchenko, acting General Director of KE "Vodokanal" Pavlo Uzunov and Deputy Chief Engineer of KE "Vodokanal" Arthur Boiarchukov. The purpose of the visit was the signing of the Agreement on scientific and technical cooperation and joint activities between KE "Vodokanal" and our educational institution. 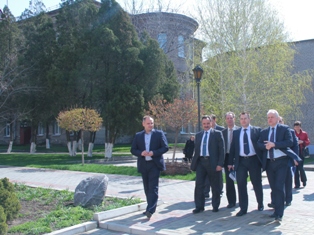 During the signing ceremony First Deputy Mayor of Zaporizhzhya on the activities of the executive Dmytro Svirkin reminded that recently in our city, a presentation of the Municipal Energy Plan, aimed at significantly reducing the cost of hot water, and the gradual replacement of natural gas in our region an alternative fuel by 60%. Thus it is from KE "Vodokanal" received 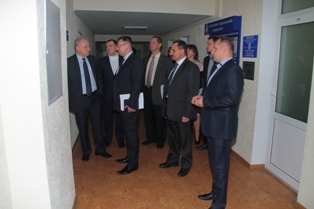 initiative to reduce the use of electricity in the work of the utility. According to representatives of the executive power, it is - one of the tasks, which should facilitate cooperation with our university.
According to Dmytro Oleksandrovych, scientific developments of Zaporizhzhya National University, which conducts a consistent and successful policy of energy saving is a very strong theoretical basis that can use the utilities of the city during the implementation of energy conservation policy in their operations. It is equally important for successful cooperation, according to Dmytro Svirkin is international relations of ZNU with other research, including foreign institutions and potential investors willing to support initiatives for energy management, efficient use of space buildings, etc. He also thanked the Rector of ZNU Mykola Frolov and all the staff of our university for showing initiative and looked forward to further cooperation in the field of energy saving with our university. 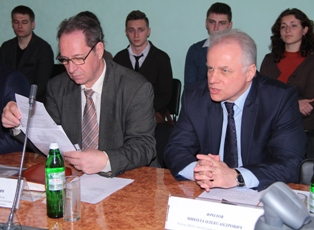 the Rector of ZNU Mykola Frolov noted that our university is a consistent work aimed at its further development, improvement of working conditions, training and life of its faculty, staff and students. «We set ourselves the task to develop applied science. From my own experience, which we already have in the field of energy, we know how important to achieve a new level of functioning of the university is the implementation of scientific development, - noted Mykola Frolov. – We can provide a wide range of scientific services as executive agencies and utilities to our city. Therefore, we hope that cooperation, which will mark the beginning of the signing of this Agreement will continue to expand and will be mutually beneficial to both parties».
acting General Director of KE "Vodokanal" Pavlo Uzunov emphasized that the energy component is about 20% of the costs of the utility. With decisive action of its management and employees they 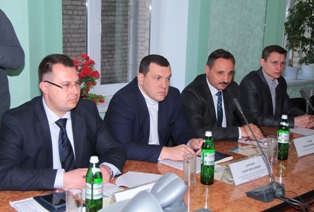 fortunate reduce power consumption by 2.5 times compared to 2003, but today it became clear that the cooperation with scientists dealing with savings, is an integral subsequent successful operation of the business. That is why KE "Vodokanal" has high hopes for cooperation with ZNU.
After completing the signing ceremony of the cooperation agreement to attend the event, including masters and Faculty of Management acted associate professor of Management of Organizations and Logistics Department of ZNU Liliia Horoshkova.
Vice-Rector for Maintenance and Supply Serhiy Kushnir delivered a presentation on the achievements of Zaporizhzhya National University in the field of energy saving. So, Serhiy gave the statistics of the results with energy saving measures introduced in our universities. In particular, he spoke about the automated system 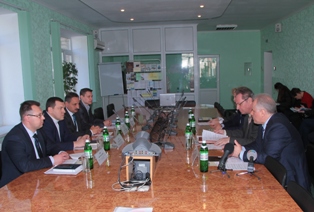 regulation of indoor heating depending on temperature conditions outside, the energy passports of all the buildings was created by the Laboratory of Energy Efficiency and Conservation, acting in our universities, etc.
Completed meeting discuss various issues regarding the possible areas of cooperation. In particular, participants discussed the possibility of an internship students of the Faculty of Management on the basis KE "Vodokanal" and retraining of local government and utilities on the basis of Sector Business Education of ZNU, where they could get more knowledge on energy management, logistics and management of organizations.
Another interesting feature of the event was a thematic exhibition, prepared by the staff of of the Scientific Library, the exhibition which includes of ZNU of teachers dedicated to energy efficiency, energy management and effective management of floor area.
«The fact that Zaporizhzhya National University became the first university of our city, which entered into a similar agreement indicates that the energy saving it through others, including engineering, universities of Zaporizhzhya. We are very grateful to the representatives of the municipality, who showed us the confidence and hope that such cooperation will open up new horizons for us», - noted Volodymyr Volkov.