Students of ZNU sang anthem of Ukraine together with Sviatoslav Vakarchuk! 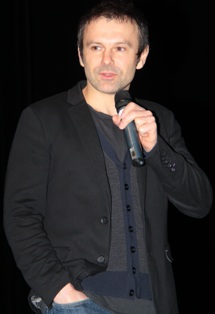 April 16 by the initiative of the Students' Council of the Faculty of Journalism of Zaporizhzhya National University (Chair - Anastasiia Kholod) was held a meeting of the students of our university with a cult Ukrainian rock musician and philanthropist Sviatoslav Vakarchuk.

The Palace of Culture "DSS" held a real full house - Zaporizhzhya students welcomed their idol. But this time, Sviatoslav sang and shared with the audience their own opinions and thoughts on a variety of issues.
Sviatoslav Vakarchuk talking about very important things for everyone. He started his lecture with his own path to becoming a free person, change of consciousness, to 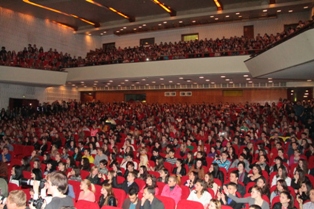 awareness of freedom. «There are three core values ​​- noted Svyatoslav - freedom of choice, security and stability. And that freedom of choice is a core value for me personally and for all European countries.»
The tenor of the meeting was the idea that every person, every citizen of our country must defend their freedom, their own values ​​and own country - and no other country has no right to impose their views to us.
After the lecture, the meeting continued in the form of question and answer. Sviatoslav Vakarchuk communicate with students in two languages ​​- Russian and Ukrainian. 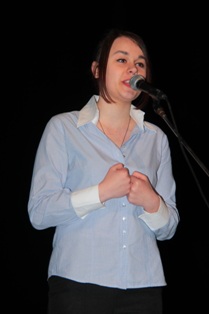 The questions asked most students of the Faculty of Journalism and Economics and Law College of Zaporizhzhya National University. They are interested in the following questions: what is happiness personally to Svyatoslav; books influenced the outlook of the singer; whom he sees a true patriot and other countries. Of course, some issues related to creativity Svyatoslav Vakarchuk and his rock band, and some - the political situation in Ukraine.
Finally lectures Sviatoslav Vakarchuk with the audience in the hall sang the anthem of Ukraine, and was presented to representatives of the Faculty of Journalism: T-shirt with the inscription "Journalism of ZNU" and a symbol of journalism - the handle.