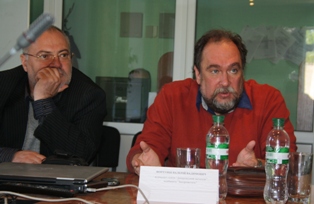 In late April, the world marked the sad date - the 28th anniversary of the Chernobyl nuclear disaster. Therefore, on May 6 Journalism Faculty students of Zaporizhzhya National University participated in a meeting with witnesses and participants of liquidation the Chernobyl nuclear disaster. It should be noted that such events are hold on the Faculty for the first time. 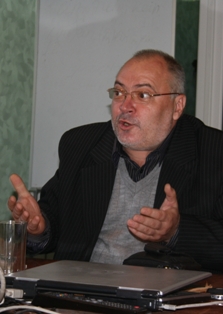 correspondent of the newspaper "Industrial Zaporizhzhya" Valerii Fortunin.
During the meeting, Volodymyr Butenko noted: «The population decreases and the number of cases remains almost the same. After the Chernobyl nuclear disaster my whole life was devoted to the analysis of those events. This tragedy - a simple example of the human factor. However, almost no one thinks that even in our city there are more than 1,500 dangerous objects».
Guests are not limited to the facts, told the students curious stories from their life.
So, the journalist Valerii Fortunin noted that first came to Chernobyl illegally. At the checkpoint, he found someone else's identity, because to go to the territory of Pripyat was very difficult. «Now I'm an honorary hypertensive and diabetic. But I'm happy to have survived. I do not regret anything. Our generation of journalists fanatics of their craft. I asked leave to Afghanistan, but was not allowed» – noted journalist.

After an accident to Chornobyl again returned only Oleksandr Butenko with a view to shoot a movie: «We decided to make a film, because Chernobyl began to lose status, there were no supporting documents. Securities burned because of radiation. Through our work was able to restore the status of more than 300 people. Silence in the city was terrible when I stamped my foot to the point of contact, audibility was 200 meters».
And, in addition to stories at the meeting and heard the terrible facts. Guests talked about the growth of radiation in this region (particularly in food) and a lack of funds for Chornobyl victims.