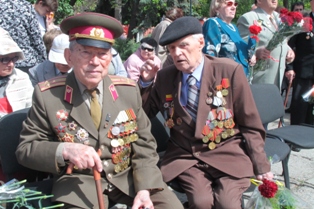 May 8th in Zaporizhzhya in the square in front of the monument to tank crew of Hero of the Soviet Union Mykola Yatsenko was a solemn meeting dedicated to the 69th anniversary of Victory in the Great Patriotic War. 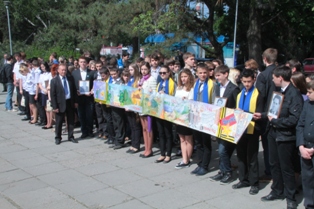 Took part in it veterans, representatives of local and regional authorities as well as representatives of the administration of Zaporizhzhya National University, teachers and students of our university, Economics and Law College, Trade College of ZNU, pupils of the district. Festival organizers was the administration of the Zhovtnevyi district of Zaporizhzhya.
With words of gratitude for the great victory over the fascist invaders to all veterans turned secretary of Zaporizhzhya City Council Roman Taran. 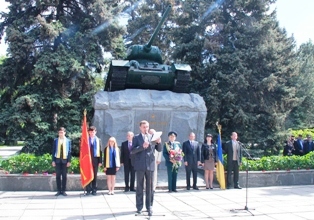 He noted that feat of veterans live forever, because history is full of examples of the liberation of the homeland of highest heroism and dedication. To congratulations joined Head of Zhovtnevyi district administration Oleksandr Manokhin. 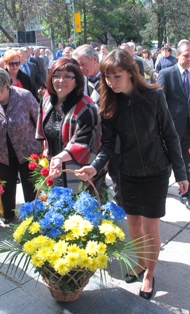 On behalf of the veterans performed Head of the City of disabled veterans and the Armed Forces, veteran of World War II Volodymyr Volobuiev. He stressed that young people with respect and gratitude keeps the memory of the war and the heroism of the older generations.
During the solemn meeting heard words of gratitude and wishes of peace and veterans gave flowers. Pupils prepared for district veterans posters to Victory Day. Completed a meeting with anthem of Ukraine and by laying flowers to the monument to tank crew of Hero of the Soviet Union Mykola Yatsenko. From Zaporizhzhya National University honorable mission carried out by members of the Department of educational work led by Rector’s Assistant on Educational Work Nataliya Voronova. The memory of all who died during the Second World War, honored with a minute of silence.