In ZNU was held a training of public journalism 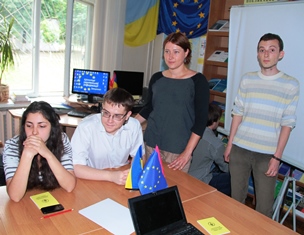 June 18 in the Scientific Library of Zaporizhzhya National University was held a training "Features of public journalism in modern conditions", organized by a civic organization "Ukrainian National Home in Chernivtsi" Dmytro Mitsevych with the assistance of the European Information Center in Zaporizhzhya.

The event was attended by students of ZNU, representatives of Zaporizhzhya media and public organizations and volunteers of Zaporizhzhya Regional Center of social services for family, children and youth.
The moderator of this training was the executive Head of the NGO "Center for Regional Development "Top-Kaia"" Oleksandra Tselishcheva, supporting cooperation with the company "Ukrainian National Home in Chernivtsi" within various social and charity projects. 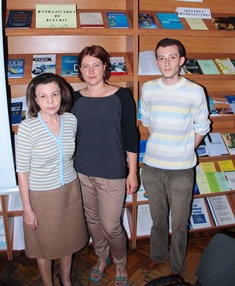 During the meeting, which was held in the format of talks and live communication, highlighted the problems of form and the main differences of public journalism, its possibilities, ways, methods and tools (blogs, social networking site "Community in Action"), and the main objectives of public journalism: reporting on current socially important problems, obtain feedback from the audience, motivate to action, bringing modern resource information dissemination. So, Oleksandra Tselishcheva noted: "Public journalism aims to encourage citizens to take an active social position and to the real action. This is a completely different concept of disseminating information".
During the communication were discussed especially the use of public journalism in creating informational messages to determine their purpose, form, target audience, attracting the attention of people through social networks and blogs to the most important social issues, taking into account the values ​​of the audience during the creation of informational materials, tracking the impact of information the public consciousness and feedback from the target audience. Also, the organizers of the event shared their experiences with the present distribution of public journalism and the use of the blogosphere in Chernivtsi and Kirovograd. 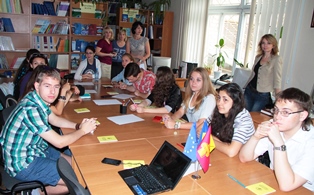 In addition, during the training Oleksandra Tselishcheva presented a contest of mini-projects, which aims to support initiatives of civil society organizations from all over Ukraine, to support the Crimean activists and immigrants and stimulate public debate about modern Crimean realities. The concept of this contest was designed for community initiatives throughout Ukraine, but mostly directed to the southern region. However, the project will be encouraged cooperation of Crimean activists and activists from other regions of Ukraine.
According to organizers, the contest involves performing two major tasks: supporting specific activities to address the issues of community activists and displaced persons from the Crimea and the maximum dissemination of information about Crimea and Crimean realities among the inhabitants of other regions of Ukraine. The list of projects and topics of the potential measures is unlimited. Projects may include representing the interests of Crimean activists and immigrants, their social adaptation, cooperation and partnership of different target audiences (journalists, students, teachers, community leaders) to overcome information barriers, stereotypes and intensify public debate on the Crimea. These projects can be conducted in various formats (festivals, workshops, online conferences, sporting events, flash mobs, film and so on).
Similar public initiatives will be considered in two categories: short-term projects (up to 3 months) of the amount of funding to 5000 UAH and the medium-term (5 months) with a funding amount to 15000 UAH. The procedure for submission of applications is fairly simplistic: projects can serve as a registered non-governmental organizations, and unregistered initiative groups from all over Ukraine. In order to present the project should fill in the application form electronically and send it to email topkaya.crimia@gmail.com (subject - Competition - Crimea). Notice of receipt of applications will be sent within three working days. Applications will be accepted until June 30,.