July 10 representatives of Zaporizhzhya National University - Dean of the Faculty of Social Sciences and Administration, professor Maksym Lepskyi and lecturer of Social Sciences Department of the same Faculty Oleh Bondarenko - made ​​their way to the center "Blyzniuky" (Gemini) - educational base of military units of Zaporizhzhya garrison. They are by prior arrangement with the management of the center, brought gifts to soldiers who today are trained on this basis. 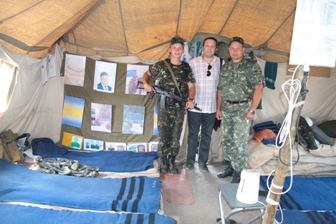 According to Dean of the Faculty of Social Sciences and Administration, professor Maksym Lepskyi, the initiator of this campaign was lecturer of Social Sciences Department of the same Faculty Oleh Bondarenko: he suggested that in addition to purchasing certificates issued Ukrainian Treasury to collect funds for the national army to provide more targeted assistance and soldiers of the garrison of Zaporizhzhya. This proposal was supported by the representatives of all Departments of the Faculty, collecting 2135 UAH as well as staff of the Scientific Library of ZNU by making a contribution of 500 UAH. 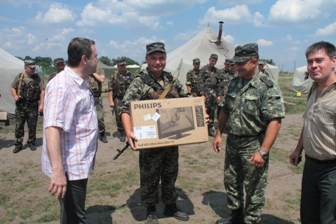 At the request of the garrison command for these funds protesters acquired for military portable TV that can run on battery power, chess and checkers, toiletries.
Deputy commander for work with staff training center "Blyzniuky" (Gemini) Lieutenant Colonel Ihor Neminskyi and antitank battalion commander Lieutenant Colonel Volodymyr Konoplenko expressed their gratitude to the guests, noting that Zaporizhzhya National University is the first educational establishments, whose expressed desire to support 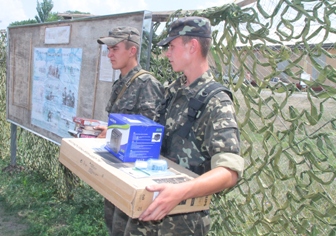 military in difficult times for them, met with soldiers, asking them about life, giving something personally.
Maksym Lepskyi during the transfer of gifts to soldiers of antitank battalion said that scientists of Zaporizhzhya are available to support them - the guys who protect their homeland. Also Maksym Lepskyi added: «I am sure that those who passed the military service - the most reliable people, so we look forward to seeing you after the return to civilian life among the students of our Faculty. We were fortunate to create a truly unique relationship between our teachers and 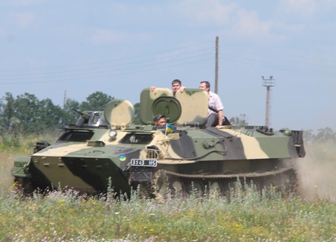 students turning Faculty of Social Sciences and Administration into a large friendly family, but we have a negative attitude to the lazy, and we achieve success is possible only through hard work».
Soldiers not only thanked the guests for their visit and gifts, but also offered to enjoy dinner prepared in field kitchens, ride the MAI (military armored infantry) and learn about the life of a soldier.
In the plans of the Faculty of Social Sciences and Administration - continued cooperation and establishing closer ties with the military training center "Blyzniuky" (Gemini).