ZNU student took part in "Supremacy of Law and Constitutionalism" 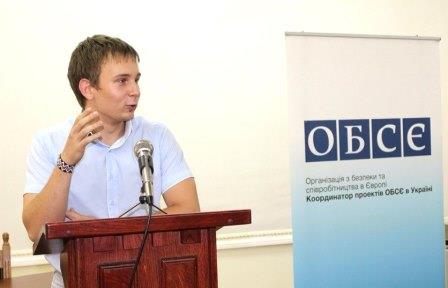 From July 27 to August 3 in Yaremche of Ivano-Frankivsk region held the 3rd School of "Supremacy of Law and Constitutionalism" for students, organized by the Organization for Security and Cooperation in Europe (OSCE). From Zaporizhzhya National University in the School took part a Law Faculty student, a member of the Students' Council of ZNU Yevgen Artemov.

Lecturers and experts of the project were Judge of the Constitutional Court of Ukraine Stanislav Shevchuk, Uzhgorod National University professor Mykhailo Savchin, a former Minister of Justice and now the Rector of the National School of Judges Mykola Onischuk, Dean of the Faculty of Law of Kyiv-Mohyla Academy Andrii Meleshevich, National Legal Advisor of law software, OSCE Project Coordinator in Ukraine Oleksandr Vodyannikov and other well-known personalities in the world of law.
For participants waited a very interesting and rich program of lectures, expert discussions, excursions and model meeting of the Constitutional Court concerning the constitutionality of the Law of Ukraine "On Restoring Confidence in the Judiciary of Ukraine". Chairman "judge" of the model meeting was Yevgen Artemov. The law was "deemed constitutional," but five "judges" have taken a principled stand on the political will of the impossibility of intervention in judicial independence.
ZNU representative Yevgen Artemov commented on the importance of the School and similar projects: "Strengthening Rule of Law of Ukraine requires a qualitative change in the system of legal education and training of professionals in the field of law. Such changes can ensure sustainable development of the legal system of Ukraine on the way to the rule of human values".