The Faculty of Economics congratulated with anniversary professor Natalia Maksyshko 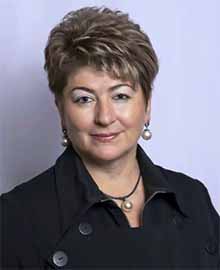 Recently, at the Faculty of Economics have held solemnity on the anniversary of D. Sc. in Economics, professor, Head of the Department of Economic Cybernetics Natalia Maksyshko.

During the holidays sounded a lot of kind words for anniversary, that her life linked with our higher educational institution.

Natalia Maksyshko got two higher educations exactly in Zaporizhzhya State Pedagogical Institute, and then - in Zaporizhzhya State University. Since September 1990, she worked in our university, since the post lecturer in mathematical methods in economics. Today Natalia Maksyshko headed the Department of Economic Cybernetics, brought a galaxy of students, some of whom chose educational career, established its own scientific school and has written many books and monographs, which have had a significant influence on the development of national science.

Colleagues heartily wished to Natalia Maksyshko a good health, great human happiness, prosperity, respect from people, love of family and friends. Teachers of the Faculty of Economics wished her continued success, boundless energy of all creative ideas and inspiration on the professional field.

Faculty of Economics of ZNU