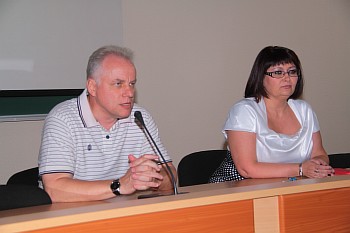 August 21 in Zaporizhzhya National University chaired by the Rector Mykola Frolov was university-wide commissions meeting dedicated to this year's settlement into students hostels of ZNU. In addition Mykola Frolov and Rector’s Assistant on Educational Work Nataliya Voronova. The event was attended by all Commission departments, which included both staff and student activists, representatives of the department of educational, administrative parts, labor unions, the legal department commanders and hostels.

The Rector noted, that the the work of our university staff on improvement of the material and technical base while preparing for the academic year. He specifically mentioned the activities of 10 students, which themselves fully upgraded two rooms in sports and recreation sector. Mykola Frolov in his speech suggested that next summer the following student construction groups were formed in all Faculties.

However, one of the issues is to settle future and current students in the hostel. For almost five hundred of wanting to live in them now available seats only for half. Radically changed situation to purchase a two-story bed and university accommodation for four students in a hostel room, where three people live. This would give nearly 200 new places, and thus would satisfy all requests for settlement. That decision was included in the agenda and then unanimously approved the present during the voting. Also, commissioners supported the decision - to settle 2nd-4th year students (whose interests lobbied Student Council) in the same rooms where they lived last year.

Rector’s Assistant on Educational Work Nataliya Voronova expressed gratitude to the representatives of the student asset. In addition, Nataliya Voronova informed the audience about the number of seats in other hostels which will be leased and rented our university. Described the preferential category whose representatives will be accommodated into hostels in the first place. This year it is - orphans or half-orphans, children from large families, people with disabilities, students from Donetsk and Lugansk regions and the Crimea, the children of Chernobyl and the dead miners. 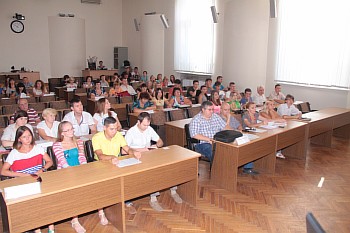 After the speeches, voting began work Faculty's commissions, which were allocated to distribute their structural units of quota places by ranking lists of their students. According to the results of their work were formed and published lists of those who dwell in a hostel this school year. A large amount of work was over and the Department of educational work. As said Head of Educational Work Svitlana Kondratenko, every student who applied for settlement to inform him of the decision, call individually (rather refers to several hundreds of entrants). Settlement of students begin next week.