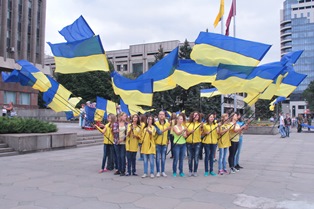 August 23 on the square in front of Zaporizhzhya Regional State Administration was celebrated National Flag Day of Ukraine, in which took an active part and representatives of Zaporizhzhya National University. 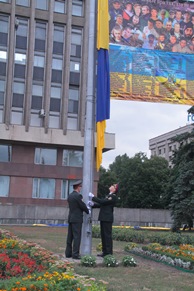 Raising ceremony of the National Flag of Ukraine began with a minute of silence in memory of the inhabitants of Zaporizhzhya region who gave their lives defending the country. The right to raise the flag were given to military who particularly distinguished themselves in the area of ATO.
After raising the national flag of an area, solemn procession passed garrison of Departments of Zaporizhzhya and Research Affairs in Zaporizhzhya region. 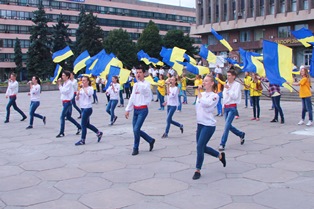 The staff of Cultural Center of ZNU with vocal and dance groups, Khortitskiy regiment, Zaporizhzhya regional center of youth and active youth of our city also joined the celebration of Flag Day by staging a bright flash mob "Youth - the Ukraine." They prepared a vocal and choreographic staging, which launched at the end of a big blue and yellow flag.
The idea of this flash mob owned to Artistic director of the Cultural Center of ZNU Andrii Bondarenko, and choreographer was Head of choreographic studio «D.A.L.S.» Iryna Vasylenko.