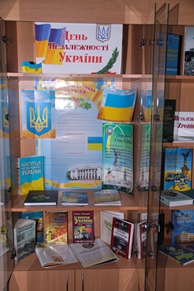 Scientific Library ZNU staff prepared several cycles of exhibitions to 23rd anniversary of Ukraine's independence and in preparation for the first lesson in the new academic year (according to letters and recommendations of the Ministry of Education and Science of Ukraine "On the First Lesson in 2014/2015") on the topic "Ukraine is a single country" and the Lessons of courage. Exhibitions began to operate from the beginning of August and will continue until the end of September.

To get acquainted with the exhibition on the theme "Day of Independence of Ukraine" you could on the stands hall directories of Scientific Library of ZNU (room 135, the 2nd academic building). Here are a few chapters on topics: "The day that changed history - August 24, 1991 Ukraine became independent", "My Ukraine - a free country" and others. The exhibition contains works of scientists of Ukraine, USA, Canada, government and legal documents, from the Declaration of State Sovereignty of Ukraine (1990) and the Act of Independence of Ukraine (1991) and the publication of books on the history and development strategy of Ukraine, Ukrainian demonstrations of patriotism people, etc. Among the copies presented on stands, highlight the multi-volume edition "Hrushevsky. Works in 50 volumes, "two volumes" Petro Fedun - "Poltava". The concept of Independent Ukraine "10 volumes" Ukraine. Anthology monuments of country building" and so on. 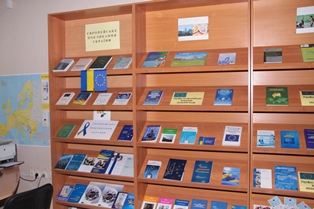 In addition to exhibition activities of the Scientific Library staff also conduct information retrieval work on the themes of independence in Ukraine, patriotic education of youth, monitor the press, make lists of articles dedicated to the defenders of our country, in particular the fight ATO members constantly update and supplement funds etc.

From the literature presented at exhibitions and in the library, with an opportunity to study not only the staff and students of the ZNU. Employees of the Scientific Library of the University regularly hold seminars for school teachers of Zaporizhzhya region, pass the latest manuals and methodological materials for school libraries and classrooms, scripts and guidelines for the first lesson and lesson of courage. Instead, get the appreciation from the management of schools and teachers, as well as students who use the university library.

Read the sources presented at exhibitions, all interested persons may in the reading rooms of the Scientific Library of ZNU.

The opening of the photo exhibition Brendan Hoffman “Brotherland: War in Ukraine” took place in ZNU
The scientists of ZNU are invited to the webinar “Scopus: content and the main functions”
At ZNU continuing Olympics among teachers and employees
ZNU Scientific Library welcomes new readers
At the Faculty of Law of ZNU held the presentation of the data book "Administrative and legal education in personalities"