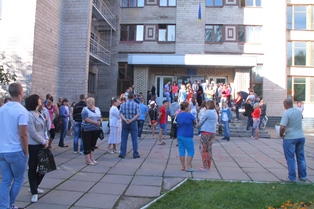 August 29 near the 3rd hostel of ZNU held a meeting of first-year students and their parents with the representatives of the administration of our university. Rector's assistant for educational work Nataliia Voronova, Head of the Educational Work Department Svitlana Kondratenko and leading specialist of the Department Tetiana Balaniuk told the audience about the features of this year's settlement procedures, as well as the living conditions in hostels of Zaporizhzhya National University.

At the beginning of the meeting Rector's assistant for educational work Nataliia Voronova appealed to parents of freshmen to explain to them what specific features of this year's settlement to the hostel. "Due to the tense situation in our country, this time we received a record number of applications from those wishing to live in the hostels - more 660. In particular, a desire expressed by many students from other settlements, including those who came to Zaporizhzhya from ATO zone. Today, August 29, we are able to settle 240 people, and in turn - has selected 400 people who have the right to live in them will be quite severe", - said Rector's assistant.

According to Nataliia Voronova, this year, senior students will be accommodated in rooms for 2 persons and freshmen - in larger rooms, designed for 4 people. As previously lived in the past three students, the fourth settlement in these premises will be conducted gradually, depending on the purchase decker beds. 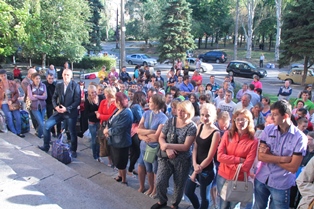 Head of the Educational Work Department Svitlana Kondratenko told the audience about the living rules in the hostel. Also warned that all perpetrators,which hamper learning and rest of other residents will be evicted within two weeks. 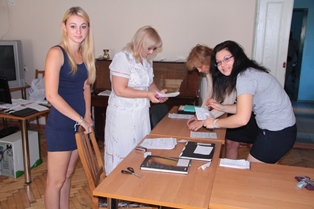 Leading specialist of the Educational Work Department Tetiana Balaniuk in her speech giving detailed consideration to all the important moments of this year's settlement procedures to hostels and advised students to the best algorithm of its passage.

In conclusion, after all students were given the necessary documents for settlement, Natalya and Nataliia Voronova and Svitlana Kondratenko individually gave answers to all the questions that have arisen in the first-year students and their parents.