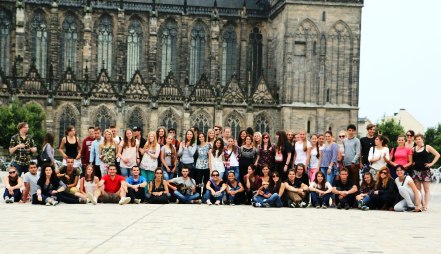 International youth project "Yevrokemp 2014", held in Germany, brought together young people from more than 35 European countries. An important achievement of this summer was that the three participants from Ukraine were two students of the Faculty Foreign Languages of ZNU - Mariia Vasyleha (Head of the International Students' Council sector) and Olha Vlezko.

In this area an international search a consensus about solutions to pressing problems this year raised the topic "Responsibility in Europe for a century challenges." Among the important guests of the project were European Minister Rainer Robru and Minister of the federal state of Zaksen-Anhalt Reiner Haselofa. Each of them expressed words of support and emphasized the fact that Ukrainian youth should not be removed from the general process of European youth. 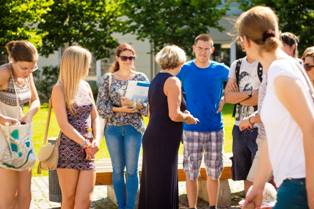 ZNU student Mariia Vasyleha had a unique opportunity to become a teamer (organizer) of Eurocamp-2014. The circle of her duties included working with the media and all the politicians who each year closely followed the work camp and support project.
Three weeks of discussions, creative media projects, cultural exchanges were devoted, in particular, the issue of political simulation elections to the European Parliament (participants may feel as politicians and inhabitants of the town. Altmark acted as the electorate). Pleasant impression left cinema evening, during which 8 were presented creative films from participants on the theme of national identity, science and technology, war and peace, social inequality, exhaustion of natural resources and more. In the international cafe, participants were able to present their country in terms of cultural and household characteristics.