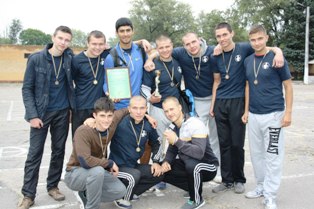 September 26, in the military unit A 1978 was held a final regional military sports competition for labor and student youth "Conscript-2014", organized by the Regional Center of patriotic education of youth and youth administration, physical education and sports of RSA. The competition was part of Zaporizhzhya National University students who have demonstrated good results of military-athletic training and won a bronze medal in the category "Students' youth". 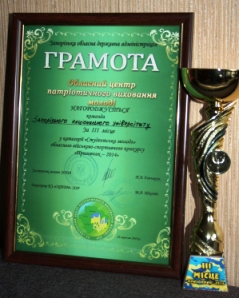 It should be noted that the event was attended by representatives of ZNU Department of Education – 1st category specialist Viktoriia Zinchenko and 2nd category specialist Oleksandr Nosenko. They were accompanied by a team of our university and supporting them at every stage of the competition. Furthermore, it is Department of Education of ZNU and Students' Council of the Faculty of Physical Education have initiated our students participate in this competition.
The team included 10 students of ZNU: Ihor Lutsov (team captain), Artem Romantsov, Vladyslav Vorotkov, Dmytro Salimonenko, Illia Kalashnyk, Oleksii Aleksandrov, Artur Suiunov, Maksym Halka, Mykyta Yumatov and Artem Khovkhun.
During a military sports competition guys were following milestones: specialized cross to medical care in terms of fighting, the military - the applied relay disassembly and assembly arms, pulling in body armor, performance standards in personal defense and contest of military song.
In military-applied relay students of ZNU took 2nd place, completing the task in 3 minutes 29 seconds. 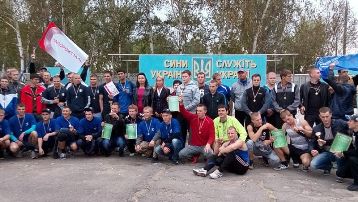 During shooting all the students of our university hit the target received the highest score. With competition of military song, ZNU team also coped best.
As a result of competition Zaporizhzhya National University took third place in the competition. End of the event the winners of the regional military sports competition for labor and students' youth "Conscript 2014" awarded diplomas and cups.

More photos by reference: https://vk.com/album-32270775_203211671:
During the preparation of the material used information from the site of ZRSA

The project of students of ZNU is a participant of the program “Public Budget” and needs your support
Master student of ZNU Liudmyla Babak is European champion in rowing and canoeing
Graduate student of ZNU Oleksandr Nadtoka showed high results at the European Championships in rowing
Weightlifters of ZNU won three more gold in the youth championship of Ukraine
Athletes and coaches of the volleyball team "Orbita-ZNU" were congratulated at the university on getting the "silver" of the Ukrainian championship
© 2018 ЗНУ Запорізький національний університет, 69600,
м. Запоріжжя, вул. Жуковського, 66,
Відділ діловодства тел./факс +38 (061) 228-75-08
Приймальна комісія тел. (061) 228-75-38 та (061) 289-12-68
Офіційна пошта