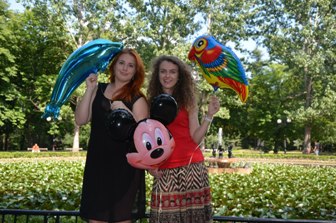 4th year students of the Biological Faculty Olena Popazova (specialization "Biochemistry and Immunology"), Maryna Sokulska and Yuliia Bulankina (specialization "Ichthyology") recently returned from Bulgaria. Due to international educational program "Erasmus Mundus ELECTRA", our students during the past academic year studying in the University of Chemical Technology and Metallurgy (Sofia) at the Department of Biotechnology.

According to the Head of Scientific Community of Students and Postgraduates of the Biological Faculty Oleny Popazovoi, they decided to participate in this program du to Bulgarian language teacher Ivan Simeonov. They all attended two-year course of the Bulgarian language, acting in the university and visiting the presentation "Erasmus Mundus ELECTRA", which organized the SCSP, interested in the opportunity to study in Sofia. However, ultimately strengthened them in this decision, Ivan Simeonov, telling that the University of Chemical Technology and Metallurgy is considered to be one of the best technical universities in Bulgaria.
Girls said, that the educational system in Bulgaria at first seems to be unusual for them: there during the semester, students acquire not 13 courses, as in Ukrainian universities, but 5-6, and all - specialized. Lectures are usually held in the form of presentations, lasting up to three hours, and laboratory classes sometimes delayed up to 5 hours. Assessed knowledge and skills on a six-point scale. Since Bulgarian pupils graduated mostly in 19-20 years, group mates of girls were older them for a few years.
Through participation in this program, our students were able to meet with young people from other countries, with them at university studying youth from Egypt, China, Georgia, Spain and so on. Interestingly, the campus in Sofia is a single city block, where the hostels of all higher educational institutions of the city and where to set appropriate conditions for education and recreation.
In addition, our students not only carefully studied, but also traveled acquainted with Bulgaria. Last year they had to travel all over the country, visiting all its attractions. Girls say that this trip gave them professional training and also contributed to the self-enrichment with new knowledge and experiences.