In ZNU was held a fair for Ukrainian Cossacks Day 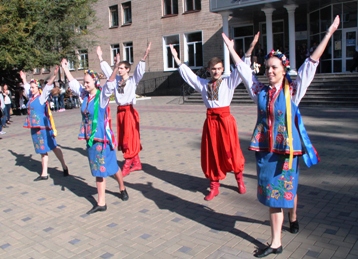 October 14 in Zaporizhzhya National University Cultural Center organized a Cossack fair, which was held on the occasion of the Ukrainian Cossacks Day, the Feasts of the Blessed Virgin Mary, and the Day of the formation of Ukrainian Insurgent Army and the Liberation Day of Zaporizhzhya.

As part of the fair on the square near the second academic building were workshops, demonstrations by pupils of Ukrainian Federation "Spas" break festive music and a charity auction-exhibition of Zaporizhzhya artists. It is the organizers took care of its national character, which was embodied not only in Ukrainian folk costumes and leading members of the festive program, but also in a variety of products and crafts of folk artists: the improvised 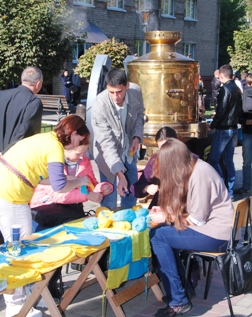 candles, sweets and souvenirs that could buy all the participants. Very bright and fun festivities were Cossacks. All the guests had a chance to warm up with hot tea of samovar-record and delicious pies from the plant employees of public catering of ZNU. Viewers were photographed on a background of patriotic frame, near Cossack mimes and on this Cossack horses, dressed in Ukrainian national costumes. Incidentally, the festival was organized with a charitable purpose. All money raised by the organizers of the auction went to the needs of military personnel who are in the area of ATO and children refugees.

The project of students of ZNU is a participant of the program “Public Budget” and needs your support
Day of Knowledge in ZNU gathered first-year students of all courses and colleges
Nearly 200 graduates of the College of Economics and Law were solemnly awarded with the certificates of associate degrees
Ceremonial presentation of diplomas took place in the Zaporizhzhia Metallurgical College of ZNU
Representatives of the student council are preparing creative and useful cleaning days in the biological station of ZNU
© 2018 ЗНУ Запорізький національний університет, 69600,
м. Запоріжжя, вул. Жуковського, 66,
Відділ діловодства тел./факс +38 (061) 228-75-08
Приймальна комісія тел. (061) 228-75-38 та (061) 289-12-68
Офіційна пошта