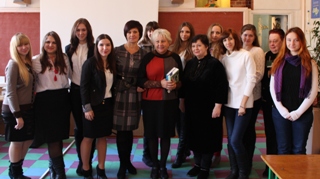 14 November in gymnasium 2 named after Lesia Ukrainian passed the commemorative evening of the famous Ukrainian linguist, professor, honored worker of science and technology, an academician of high school Victor Chabanenko. It organized and performed by students of Philological Faculty of ZNU, led by Dean Tamara Khomiak.

The choise of the 2nd gymnasium was due to the fact that the idea of holding such evening to Dean of the Faculty of Philology Tamara Khomiak appealed the 2nd gymnasium school teacher Larysa Novytska. In addition, three students who took an active part in the preparation of the event, is a graduate of this secondary educational institution (they are Alina Boieva, Nina Levadna and Veronika Kulakova). 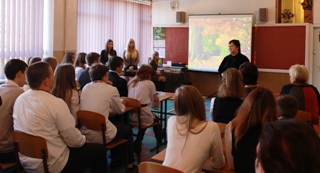 Hosts spoke about the achievements of Victor Chabanenko – researcher of the Lower Dnieper, of the Velikiy Lug, a member of the National Union of Writers of Ukraine, Honorary Chairman of Zaporizhzhya association "Enlightenment" named after Taras Shevchenko. Noted that he was awarded the Prize of the Ukrainian Society for Protection of Monuments of History and Culture named after Pavlo Chubinskyi, Zaporizhzhya Regional Cultural Foundation named after Yakov Nowytskii, the National Union of Writers of Ukraine and many other awards.